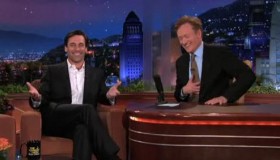 Last night Mad Men star Jon Hamm was on The Tonight Show, chit-chatting with Conan O’Brien about everything except Mad Men, which was frustrating for those of us wondering if Don Draper knows how to swim. (Yes yes, we all know creator Matt Weiner has put the kibosh on revealing the state secrets, but come on, have you guys not figured out that the rest of us just like talking about it?) In any case, we did learn that Jon Hamm’s grandmother isn’t a fan of the show. Her feedback: “I don’t think you’re making very good decisions.” Well, frankly, that goes double for Conan.

We’ll get to that. But first, the video: They did talk about another TV show, 30 Rock, on which Hamm guest-starred as Tina Fey‘s handsome doctor paramour. Hamm didn’t have any scenes with any other cast members, but described meeting the gang at the table read — particularly Tracy Morgan. Said Hamm: “Everyone should have the experience of meeting Tracy Morgan for the first time…he is just a spectacular human form of chaos.” They also cracked up just looking at a picture of Jack McBrayer. Oh, also there’s a clip of Jon Hamm playing baseball. You’re welcome. Watch below:

A note on this interview: It was fine but boring. Not Jon Hamm’s fault — he was animated and chatty and came ready to play ball. But did Conan miss the part where everyone is excited about Mad Men? Where Mad Men avatars completely took over Twitter? Where people like Judd Apatow are talking about how excited they are? Where the New Yorker is running Talk of the Town pieces and Jezebel is playing Kremlinologist on Season Three photos? How about all the reviews and previews and tie-ins excuses to write about Mad Men because people love it? Sesame Street is doing a parody this year, for God’s sake. Conan, wake up!

It’s not like Jon Hamm won’t talk about the series — he did just that in the Chicago Tribune. But there’s got to be room for that after talking about another TV show that isn’t about to premiere to crazy fever pitch. Yes yes, Kenneth the Page is great. But how about having a picture of JOANIE ready to show? Do you want your show to be irrelevant?

I can’t emphasize enough what a missed opportunity this was. Mad Men has a lot of people very excited — in August, the slowest new months. Bloggers and critics also love Mad Men — and these are the people who pick these clips up the next day and give them new life. That all plays back into ratings — which Team Conan should be worried about. Shamelessly exploiting Jon Hamm should be a no-brainer. The Internet could not want him more.

I’m not kidding: when grabbed, this video had been played just 193 times. On the website of The Tonight Show — what should be a huge juggernaut, what once was a huge platform. Conan has to figure out how to use it better, unless he wants that to be just another piece of television history.