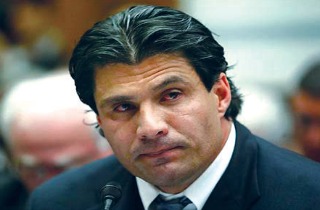 With stress levels high over the impending fiscal cliff, it seems the Senate may have been missing a simple solution all along. Jose Canseco, former Major League Baseball player, tweeted out a series of three easy steps for solving the fiscal cliff Monday afternoon. Mere hours are left before the nation plummets over the cliff, so the nation might do well to heed his words of wisdom.

Canseco, it seems, lost a “deal” in Washington because of the fiscal cliff, and as such, is a heavily-invested player. Politicians may be not be serving us well enough because of their “gutless” nature. They’re “always trying out for there [sic] next job,” he says. 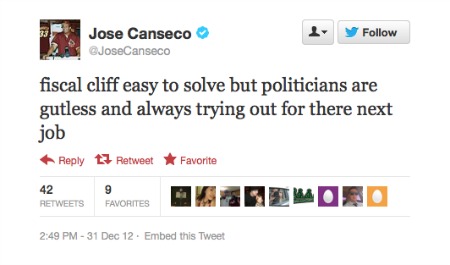 First, Canseco says, “replace income tax with spending tax.” Income tax was created just to fund the Civil War and “was to be temporary for us.” 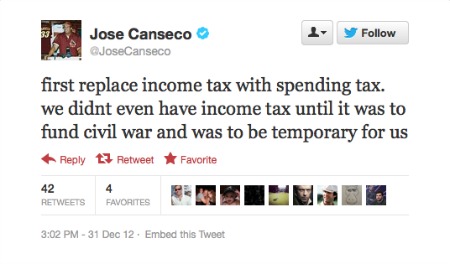 Why is this such a good first step? Canseco explains that “spending tax rewards savers and normal workers and hits the rich guys.” Even better – it “makes consuming go down and helps save the earth.” 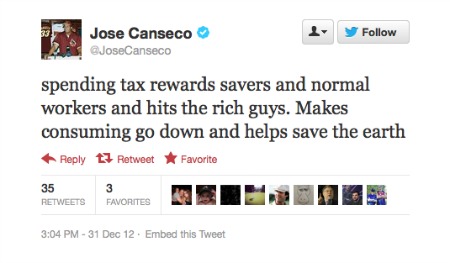 Next, we should bring our troops home from the “central east.” If we could reduce military spending, says Canseco, the money could be used for schools in America instead, saving billions. 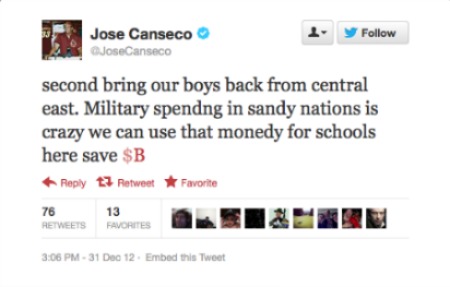 Finally, we should stick it to the politicians by making their jobs “volunteer with no pay.” According to Canseco, “they get plenty of perks and book deals and power, they should be paying us.” 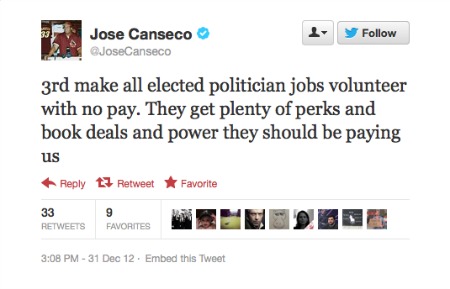 Apparently, more than a few Tweeps were fans of the baseball player’s fiscal plan, but might be in for a bit of disappointment. “Thank you for your support,” he Tweeted, but he won’t be running for president any time soon. Why, you ask? “I was born in Cuba not Hawaii.” 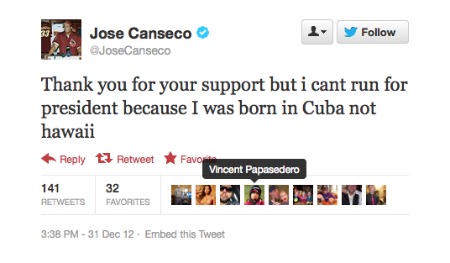