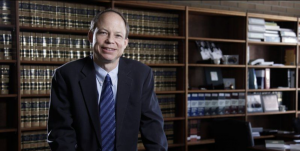 Aaron Persky, the Superior Court judge facing a recall effort from his notoriously light 2016 sentencing of convicted Stanford rapist Brock Turner, broke his silence this week with a statement defending his decision.

Turner, who raped an unconscious in an alley before witnesses, was sentenced to just six months in jail and got out in three on “good behavior.” Whether it was Persky’s intent or not, the light sentencing seemed to send a clear message to survivors of sexual assault that their experienced will be minimized, trivialized even, that they will be denied justice simply to protect the futures and careers of their undeserving assailants.

Persky defended his 2016 decision as brave. In his eyes, he courageously defied public opinion to do his job and go easy on a first-time offender. How very noble of him to protect a wealthy, white, Stanford-educated adult rapist from the consequences of his actions.

“California law requires every judge to consider rehabilitation and probation for first-time offenders,” Persky wrote. “As a judge, my role is to consider both sides. It’s not always popular, but it’s the law and I took an oath to follow it without regard to public opinion or my opinions as a former prosecutor.”

According to Persky’s statement, the case he presided over sounds like a sort of “he-said-she-said” as he describes agonizing over “both sides.” The reality is that there was only one side — the evidence was so overwhelming Turner could not even try to deny that he did what he did.

Persky additionally claims that he “fought vigorously for victims,” as if this somehow makes it OK that this one time he just so happened to throw a young woman under the bus. This one case is so much more than this one case — it’s the measure of our respect for a generation of sexual assault survivors, who face doubt, shame and blame when they can’t provide perfect evidence, and like the case of Turner’s victim, face dismissal and respect even when they do.

But predictably enough, Persky’s statement reveals that he has yet to grasp the magnitude of his 2016 decision — and that’s exactly why recall efforts against him are so important.

A group led by Stanford University law professor Michele Dauber filed paperwork on Monday to take the first formal step toward removing Persky. The group must gather 59,000 signatures from registered voters to get a measure to remove Persky on the 2018 ballot next year. If Persky isn’t removed, there’s almost no question the story of Brock Turner will soon repeat itself.