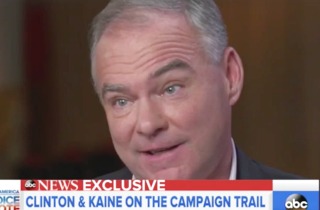 The Democratic Party candidates had a joint sit-down with ABC’s David Muir, in which they discussed matters ranging from the Clinton Foundation to Trump’s recent trip to Mexico. After Clinton bashed Trump for choking on what she called a “diplomatic incident” of a trip, Muir asked her and Kaine for their thoughts on the mogul’s persistent remarks about them not having the will or physical stamina to govern America.

Muir quoted Trump at a recent event, where among other things, he asked the room “Does [Clinton] look presidential, fellas? Give me a break.” Kaine pounced as soon as Muir finished by saying the remark was “an idiotic comment.”

“This great public servant has been on the field for 17 or 18 months, it’s hard to keep up with her,” Kaine said. He also noted that on the same day Trump attacked Clinton for having no energy, she gave a speech on veterans issues before the American Legion.

Muir confronted Trump as well, this weekend, over his attacks on Clinton’s looks, which the mogul deflected by talking about his temperament.

WATCH: "I just don't think she has a Presidential look." – @realDonaldTrump on Hillary Clinton https://t.co/5lZAJS2Mfy