Kareem Abdul-Jabbar Explains Why Soccer Goes Against the ‘American Ethos’

Kareem Abdul-Jabbar Explains Why Soccer Goes Against the ‘American Ethos’ 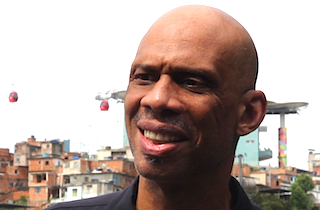 What do Ann Coulter and Kareem Abdul-Jabbar have in common? On the surface, not much. But over the last week, both have written columns on what heightened American interest in soccer around this year’s World Cup means for our culture.

While Coulter called America’s growing interest in soccer “a sign of the nation’s moral decay,” Abdul-Jabbar took a slightly different approach. Though the 19-time NBA all-star agreed that there’s something about soccer than runs counter to the “American ethos.”

According to Abdul-Jabbar’s new essay in Time magazine, soccer “does not seem destined for the popularity that supporters have been predicting for the last decade.” He admits that his “dire diagnosis” seems “crazy” in light of America’s current World Cup fever, noting that 25 million viewers watched Team USA play Portugal last Sunday (more than 10 million people watched Germany beat Team USA on ESPN in the middle of the day last Thursday, with another 3.2 million streaming the game online).

But Abdul-Jabbar attributes those high numbers to the World Cup’s “rarity factor.” On a consistent basis, Major League Soccer games average just 174,000 viewers compared to millions for the NBA and NFL. But why is that the case?

Is there something fundamentally different about watching soccer that turns people away by the millions? Apparently so. For one thing, there’s a lot of movement but not much action. American audiences see people kicking the ball to a teammate, only to have it intercepted by the other team. A lot. To the average American used to the hustle of basketball, the clash of titans in football, the suspense of the curve ball in baseball, or the thrilling crack of the slapshot in hockey, the endless meandering back and forth across the soccer field looks less like strategy and more like random luck. It lacks drama. Of course, that’s not true at all, but that is certainly the perception.

Ultimately, Abdul-Jabbar concludes that soccer “doesn’t fully express the American ethos as powerfully as our other popular sports.” He continues:

“We are a country of pioneers, explorers, and contrarians who only need someone to say it can’t be done to fire us up to prove otherwise. As a result, we like to see extraordinary effort rewarded. The low scoring in soccer frustrates this American impulse. We also celebrate rugged individualism, the democratic ideal that anybody from any background can become a sports hero. We like to see heroes rise, buoyed by their teammates, but still expressing their own supreme individual skills. Certainly soccer has its celebrated stars, from Pele to Beckham, but those skills seem muted on TV where we’re often looking at small figures on a large field and therefore these feats appear less impressive than they really are. In football, basketball, baseball, and hockey, team effort is rewarded with points and individual greatness is as instant and immediate as a one-handed snagged football pass, a three-pointer from the corner, stealing home base, or a snap-shot of the puck into the goal.”

In short, Americans like to see their athletes score. A lot. What the former NBA star does attempt to explain is why so many other cultures around the world — in countries as different as England and Argentina — love soccer above all else. What is it about the rest of the world’s “ethos” that’s so different from America’s?