Kasich Co-Chair: You’ve Got to Take Trump Out ‘With a Head Shot’

Kasich Co-Chair: You’ve Got to Take Trump Out ‘With a Head Shot’ 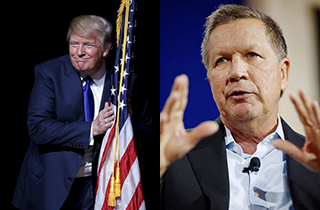 An Illinois co-chair for the John Kasich campaign shrugged off criticism Tuesday after reports emerged that he called for taking out rival Donald Trump “with a head shot.”

On a WGN radio show last week, Pat Brady told host Steven Chocran, “If you’re going to take on Donald Trump, you’ve got to take him out with a head shot,” later adding, “You gotta be ready to rip his head off.”

In a blog post, Doug Ibendah called out Brady, asking, “Who talks like that? If some nut used the term ‘head shot’ in referring to President Obama in a similar fashion, that person would likely be paid a visit by the Secret Service, and I would personally hope so.”

Trump used Brady’s rhetoric to bash his Republican rival, saying in a statement Kasich “never thought he would embarrass himself like this.”

But Brady told Politico he’d never call for violence against the business mogul, stressing that he meant the phrase figuratively.”That’s a term of art we used when I was an assistant U.S. attorney many years ago to mean if you’re going to win a big case or win a big argument, you got to take them out with a head shot,” Brady said.