Katie Couric Could Single-Handedly Underwrite One Year of NPR News 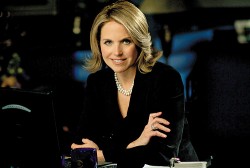 How much is Katie Couric worth to you? If you are a fan of Couric’s style (on great display this week during her Glenn Beck interview) or the CBS Evening News, or if you happen to be its President, the answer is a great deal. To the tune of $15 million to be precise. However! If you happend to be a fan of NPR, as well as, say, someone who is consistently won over (beaten) down by their pledge drives, she might be worth a great deal more.

That’s because CJR has done the math and concluded that Couric’s annual salary is more than the entire annual budgets of NPR’s Morning Edition and All Things Considered combined. Emphasis mine. If you happen to be a listener to either of these shows (and many people are…NPR has a suprisingly enormous audience) that comparison sort of throws a whole new light on things. Because while Couric is very good at her job, and enjoyable to watch, it would be hard to argue that what she brings to the news reporting table in the 24 minute segment she anchors every night can compete with what Morning Edition offers in terms of informed news, let alone Morning Edition combined with All Things Considered (and I haven’t even mentioned Scott Simon yet!).

So, what’s the point of this comparison? Other than to reiterate that NPR is very smart about how and where it spends its money, mostly it’s just another way to highlight why mainstream news operations appear to be consistently missing the relevance bus of late (though, @katiecouric is a big step in the right direction). Also, that at some point the person who holds the purse strings at the networks may do well to unhook themselves from the voice of God philosophy that is a hangover from the years before cable, and now the Internet, took over, Katie Couric is good, very good, but I am not sure she is as good as two (top notch) NPR shows whose host’s names have yet to be mentioned in this post primarily because they are secondary to the quality of the programs themselves.