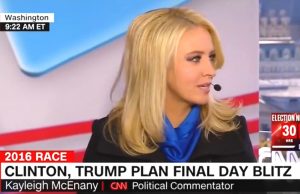 During the third debate, Trump refused to say that he would concede the election should he lose. “I will look at it at the time,” he said. He went on to say that the election was “rigged” because of widespread voter fraud, a skewed media, and because Clinton was “guilty of a very very serious crime,” he said.

“We heard during the debate, when he said, ‘I want to wait and see what happens,’ so much was made of that,” McEnany said on CNN Monday morning. “But I think that that’s a completely fair point.” She noted that in the case of an extremely close election — such as what occurred in Florida in 2000 — additional scrutiny might be warranted.

She continued: “We’ve heard from those around him, that if it’s a clear and concise result, and there is nothing to contest, he won’t contest it. But if it does comes down to a few hundred votes, which it certainly could, if it’s a 269-269 electoral race, the stakes are high, and he’s going to make sure that every vote is counted.”

“This is where I think people hear different things when they watch debates,” she said. “I heard, ‘I want to wait and see what happens because there could be an event like that.’ That was the footnote of the statement. But Democrats obviously heard ‘the election’s rigged,’ he’s setting this up in case he loses. So I think it all comes down to how you hear it.”

Trump has repeatedly told his supporters that the election is “rigged,” including at the debate.