Lara Logan: Re-Victimized By The Internet

If you think it’s brutal out on foreign streets during a revolution, try going online sometime. While generally not physically dangerous, the internet is full of brutal people, most masked behind a cloak of anonymity. Over the last several days there has been a deluge of opinion pieces and news reports about the sexual assault of CBS’s Lara Logan in Cairo’s Tahrir Square. It’s big news, so that’s not surprising, but the number of reader comments blaming Logan for the attack is disturbing.

It’s abhorrent enough that there are a few opinion pieces (and one self-professed jerk on twitter) blaming Lara Logan herself for the attack, but even among the supportive pieces many comments left by readers of are also beyond the pale. As a woman and a mother to two daughters reading those comments is like a punch in the gut. There aren’t just a handful of comments either; I have easily read hundreds at this point and if I kept looking I could find hundreds more.

My first taste of the barrage of cruel reader comments came from a rare unfunny piece by Alexandra Petri in the Washington Post. I was hoping it was an isolated incident, and maybe ComPost readers are just jerks. Sadly, I can’t find a piece about the attack on Lara Logan that doesn’t follow this trend. The main points of blame are that she’s too pretty, too white or too blonde to be covering dangerous stories in the uber sexist middle east, that she should have known better than to go there, she shouldn’t have left her children to do her job, and among the most heinous, that she deserved what she got for some alleged infidelity – which I refuse to even Google based on the principle of the matter. None of the preceding items have any place in a story about sexual assault. – A “brutal and sustained sexual assault” according to the statement by CBS 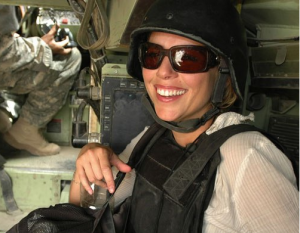 News. Let’s look at those words: Brutal. Sustained. Sexual. Assault. Individually, they are strong words and their meanings are clear. I won’t begin to speculate, but those commenters who think this was nothing more than a game of grab-ass that got out of hand need to hone up on their vocabulary.

Just like her male colleagues Lara Logan was doing her job. Richard Engel and Anderson Cooper are pretty too, but no one would dare turn that into a reason for not doing their jobs. SNL jokes aside, their looks wouldn’t be held against them if they were assaulted. – And don’t presume that men are not also sexually assaulted in the course of doing their jobs. According to the Committee to Protect Journalists, sexual assault has been used as a tool to intimidate male journalists as well. If that were ever reported, I can guarantee there would be snarky reader comments to follow. People can be cruel and internet anonymity pushes them to be barbaric.

I’ve not done any real statistical research on the numbers, but at a glance it appears there’s not a big gender divide in who’s playing this blame game. Women and men alike are finding reasons to blame the victim. It’s disappointing to realize that humans haven’t evolved enough to know better. It doesn’t matter what you think of Lara Logan’s looks, intelligence, or how she got to the location of her attack. It does not matter. To make it matter victimizes her all over again.

Lori lives in the greater Cincinnati area. She’s a stay-at-home mom of two girls while her husband works to pay off her two college degrees. When not changing diapers or sorting coupons she can be found watching the news, tweeting as @LoriNKY or blogging at Mish Mash Momma.

Photo of Logan via Ms. Magazine.