Larry King’s Farewell Speech After The Final Show: “It Will Always Be A Part Of Me That’s Gone.” 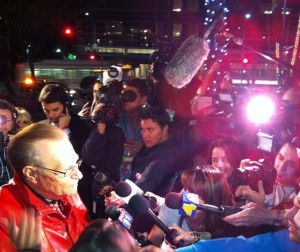 Larry King signed off his eponymous “Larry King Live” last night for the last time, after a star-studded show faded out to a final last Tron-like shot of his glowing microphone, after his final “so long.” But after, there was a party – and more heartfelt words after a quarter-century of that desk and those suspenders anchoring CNN’s prime time schedule. Filmmaker Jason Pollock was in attendance to capture King’s impromptu speech at the event in LA, where he dwelled for a moment on what he would miss:

Larry King Live has been one third of my life. For two thirds of my life I’ve been a broadcaster, and for the first third of my life I was a kid in Brooklyn. So I have no concept of what to say because I’m filled totally with mixed emotions…I’m looking forward to doing other things, maybe even greater things. But on the other things, it’ll always be a part of me that’s gone. And I’ll miss it. It’s that set, and those desk, and the wonderful staff, and Wendy – and everyone associated.

(“Wendy” is Wendy Walker, executive producer of Larry King Live, and co-author of the poem Katie Couric read on the air last night.)

King then went on to thank a roster of friends and relatives by name – almost: “I can’t remember everybody, I’m 77 damn years old. I’m a Jew in heat! Jesus! Now where was I? In fact, where are we?” Ha. Then his wife spoke, followed by an encore imitation by his son Cannon who frankly puts Fred Armisen to shame. No doubt years of training at Nate & Al’s. The full – and very sweet – video is below, with a few more photos from Pollock here.