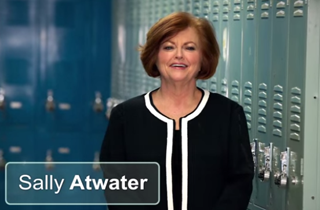 Unfortunately, Sally could barely live up to Lee’s legacy — especially the part of the legacy that involves giving a basic answer to a simple question. (Wait, that’s not a legacy. That’s just something normal people should be able to do.)

First, Cassell asked her about her stance on sex education, and we’re just going to put this transcript here:

CASSELL: What’s your position on sex education in a public classroom?

CASSELL: But what does that mean?

ATWATER: [Stutters] Well, we have certain health standards that our schools teach, and that’s what I’m gonna do right now. And parents do have options to whether to go or not and attend these classes.

CASSELL: I understand. But you do think it’s appropriate to teach sex education in a public classroom?

ATWATER: That is a parental option, sir.

ATWATER: Well, sir, I am a teacher. And I want to go by the health standards right now.

CASSELL: Alright. As a mother, do you think it’s appropriate?

ATWATER: You know, my girls at that point in time went to parochial school —

CASSELL: With all due respect, Mrs. Atwater, you’re avoiding me. You’re not answering me —

ATWATER: Well, you keep pressing me!

This weird sex education question-dodging dance goes on for a few minutes, and so Cassel tries to salvage the interview one last time by asking about evolution:

CASSELL: As far as where we came from — evolution versus creationism — what’s appropriate for the classroom, and what is not appropriate?

ATWATER: Again, I’m gonna go back to what our science standards are.

CASSELL: What are our science standards?

ATWATER: Our scie — well, our science standards, just — that’s what we teach in our schools now.

CASSELL: Oh, I know that. I just wonder if, specifically, you knew what they were. Since you want to be superintendent of education.

ATWATER: Well, I — I do, but I’m not gonna go any further than that right now.

[WORD1063 via Gawker]
[Image via Atwater for Education]