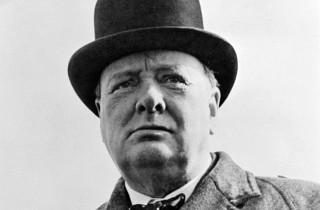 Once upon a time, the friends and relatives of Sir Winston Churchill, British Prime Minister and defeater of fascism, were worried that he was seriously thinking about converting to Islam.

But from the letters The Telegraph dug up, his fascination seems rather harmless, though kind of antiquated and quasi-orientalist, by today’s standards. Churchill, who had fought in Sudan and India during his earlier years, had a habit of dressing up in Arab garb with his friend Wilfrid S. Blunt, “the poet and radical supporter of Muslim causes.” Basically, he was just a big fan of a romanticized version of Islam, as this 1907 letter purports:

In the letter, discovered by Warren Dockter, a history research fellow at Cambridge University, [Churchill’s future sister-in-law Lady Gwendoline Bertie] pleads: “Please don’t become converted to Islam; I have noticed in your disposition a tendency to orientalise [fascination with the Orient and Islam], Pasha-like tendencies, I really have.”

Lady Gwendoline, who married Churchill’s brother Jack, adds: “If you come into contact with Islam your conversion might be effected with greater ease than you might have supposed, call of the blood, don’t you know what I mean, do fight against it.”

In a letter to Lady Lytton in the same year Churchill wrote: “You will think me a pasha [rank of distinction in the Ottoman Empire]. I wish I were.”

Okay, no one uses the term “pasha” anymore unless they’re in a 18th century opera.

But in all seriousness, Dockter, who spoke to the Telegraph, said that Churchill held paradoxical views of Islam: in some ways, he was a staunch supporter of Muslims, holding the religion in a high esteem unusual for the period, and allocating money to build a mosque in London during World War II. In other ways, he inadvertently caused the Middle East to become a sectarian mess:

Ironically, many of the fault lines between Islam and the West have their roots in the world Churchill helped shape after the collapse of the Ottoman Empire and the redrawing of the Middle East at the end of the First World War.
The settlements between the region’s colonial powers, brokered by Churchill, with T E Lawrence – “Lawrence of Arabia” – as an adviser, gave birth, in Dr Dockter’s words, to “the Middle East we know, warts and all”.

Somewhere in the world, though, someone will use this story and call Churchill a “secret Muslim.”

[The Telegraph]
[Image via United Nations]