Liberals And Womenfolk: Learn The Difference Between Automatic And Semi-Automatic Gunfire! 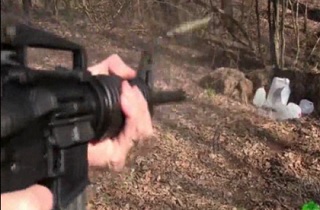 On Wednesday, I wondered about the media’s virtual shutout of pro-gun Newtown parent Mark Mattioli, who has praised the NRA’s newly-unveiled plan to arm school personnel against future attacks. My theory is that even the conservative media believes that Mattioli’s politics would make him easy to dismiss, which is why no one has highlighted the more explicitly political portions of his testimony before the Connecticut legislature. That’s a shame, because Mr. Mattioli raised a great question about the public’s awareness of the capabilities of the weapons they overwhelmingly want to ban.

The main reason I highlighted the media’s blackout of Mark Mattioli was to demonstrate that politics should not have a bearing on which voices the media decides to amplify, and which voices they silence. Honestly, though, the portion of his testimony that was blacked out by left, right, and center media rankled me. That’s the point, of course, that we shouldn’t silence someone just because we disagree with them, and we ought to be able to engage with them respectfully and honestly. Part of that honesty is admitting that I inwardly sneered when Mattioli said that “millions of women, especially, across this country, do not realize that’s the definition of a semiautomatic gun. And I think there’s been fear, put out by the left, to make people think that what happened in that room on December 14th, it was a spray of bullets.”

I thought to myself, in snotty liberal voice, “Well, I sure as hell know the difference, and I’m sure that ‘millions of women’ do, too!”

As it turns out, I was wrong, I know nothing of the difference between semiautomatic gunfire, and the fully automatic variety. This is, of course, just further proof that the media’s ignorance of Mark Mattioli is wrong. By restricting the debate to people we agree with, or people at the “entertaining” fringes of the discussion, we miss out on valuable conversations. In Mark Mattioli’s case, I think he has pointed out the very real failure of the media to measure the degree to which the public is aware of guns and gun laws, despite many months of contradictory polling.

We don’t actually know how many people, women or otherwise, are unaware of the difference between semiautomatic assault weapons (which are the subject of a proposed ban) and fully automatic guns (which have very effectively been banned for 80 years), and the media ought to poll that question, along with many others. Until they do, though, it’s up to those of us, who take journalism’s duty to serve the public seriously, to inform them of that difference.

What this difference means, in terms of how we view the operation of these weapon, is very important to the current debate on gun regulation. It’s a point that Mark Mattioli made very powerfully in his testimony, but which has been trivialized by the pro-gun folks that cable TV uses into a talking point about assault weapons “looking scary.”

Until I heard Mark Mattioli’s testimony, I thought I had a pretty good idea of what the capabilities of a semiautomatic weapon looks like. I’ve seen lots of movies, I know the difference between, say, the gun Mr. Pink uses in Reservoir Dogs, versus the fully-automatic weapons that pop up on Sons of Anarchy with great frequency. Boy, was I ever wrong. See if you can tell which of these weapons are semi-automatic, and which are fully automatic:

Some of the people in these videos are using an accessory, called a “slide stock,” that helps the shooter to fire more quickly, but none of the semiautomatic weapons in that video were modified for automatic fire. Frankly, I was stunned by these clips, and I’m pretty sure others will be, too. From his description, I’m not even sure this is what Mark Mattioli has in mind.

While watching these videos, though, I also arrived at the answer to the question that Newtown parent Neil Heslin asked at that January hearing: why does anyone need assault weapons or high-capacity magazines? The answer appears to be “to get your jollies.”

Now, I’m not being facetious here, those videos make shooting look like an awful lot of fun. There’s nothing wrong with getting your jollies, getting your jollies is important. The thing is, we could ban these assault weapons and high-capacity magazines, and still dispense jollies to all. The last guy in that video, the one shooting a fully-automatic AR-15, was doing so legally, at a federally-regulated firing range. Assault weapons and/or high-capacity magazines could be similarly classified, and these weapons could be kept out of circulation the same way machine guns are.

I agree, broadly, that having an armed police officer (not teachers or security guards) in every school would be an acceptable way to enhance our children’s safety, but as much as I enjoy the getting of jollies, I don’t want that school police officer to be this badly outgunned. Americans have to ask themselves if it’s worth a little extra jollies-getting legwork in order to keep firepower like this from being unleashed in movie theaters, or classrooms, or wherever the next tragedy will occur.