Limbaugh’s Impression Of Obama’s Mission In Uganda: ‘I’m Sending The Soldiers To Fight The Christians In Africa’ 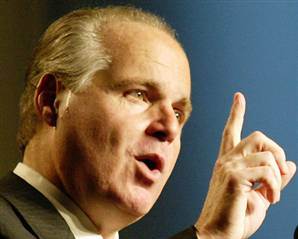 On his radio show, Rush Limbaugh sought to educate his listeners about the “Lord’s Resistance Army.” You may have read that name in headlines recently, seeing how President Barack Obama has made the decision to deploy 100 military advisers in order to help regional forces combat and remove the L.R.A.

In a bit entitled “Obama Invades Uganda, Targets Christians” on the show’s official website, Limbaugh stressed that the group is Christian:

He added that the group is focused on fighting Muslims in Sudan. Ergo, our President is attempting to forcibly remove (i.e. kill) Christian soldiers who are in combat with Muslim forces. Furthermore, said Limbaugh, the L.R.A. has a list of objectives that would seem extremely noble and desirable in the eyes of most Americans looking in on the conflict from the outside: “To remove dictatorship and stop the oppression of our people; to fight for the immediate restoration of the competitive multiparty democracy in Uganda; to see an end to gross violation of human rights and dignity of Ugandans; to ensure the restoration of peace and security in Uganda, to ensure unity, sovereignty and economic prosperity beneficial to all Ugandans, and to bring to an end the repressive policy of deliberate marginalization of groups of people who may not agree with the L.R.A. ideology.”

All good things! The New York Times‘ “The Lede,” however, has a theory about where Limbaugh happened upon this particular list:

The conservative host, who has previously demonstrated a fondness for sharing information found on Wikipedia with listeners, even when it is incorrect or misleading, appears to have taken this list of objectives from a defense of the Lord’s Resistance Army delivered by one of its leaders 14 years ago, which is featured in the online encyclopedia’s entry on the group’s ideology.

The problem with that is that Limbaugh has not presented his listeners with an accurate picture of what the L.R.A. is or what it stands for. As any person with even a rudimentary awareness of world history knows, there have been many groups who have professed to uphold noble and positive religious ideals that they do not put into practice, that they, in fact, undermine at every turn. And while defining the L.R.A. as a “Christian” group may conjure many positive, lovely associations, the reality, where the Lord’s Resistance Army is concerned, is far different.

The Washington Post, in reporting on Obama’s decision to deploy these advisers to Africa, offers a primer on the group and its leader, Joseph Kony (who calls himself a “spokesperson” for God, and who is currently on the Specially Designated Global Terrorists list):

Since its creation in 1987, the group has engaged in an armed rebellion against the Ugandan government and committed an extraordinary number of human rights violations. Most notably, his troops enter a village, killing the adults and kidnapping the children. The boys are enscripted into the army and the girls are taken as ‘bush wives.’

Obama notes in his letter that the LRA has “murdered, raped, and kidnapped tens of thousands of men, women, and children in central Africa” and “continues to commit atrocities across the Central African Republic, the Democratic Republic of the Congo, and South Sudan that have a disproportionate impact on regional security.”

In addition, the group, contrary to the list of objectives Limbaugh shared on his show, wants to establish not a “multiparty democracy” but, rather, “a theocratic state based on the Ten Commandments” and on the tradition of a northern Ugandan ethnic group, the Acholi people.

WaPost has also helpfully linked to a series of leaked cables on the L.R.A. and the situation in Uganda.

Talking Points Memo delves into more specific atrocities committed by the group, including “mutilation and the sexual enslavement of women.”

It’s one thing, of course, to be opposed to Obama’s decision to involve the U.S. in what’s going on in Uganda. There’s a fair and valid argument to be made there. But Limbaugh didn’t do that. He misrepresented the aims and the actions of a very dangerous group, sweeping the violent atrocities the group and its leader have committed under a rug he’s labeled “Christianity.”

Of course, it wouldn’t be fair to say that Limbaugh never mentions that the group has committed heinous acts. He does touch upon the fact that there are “accusations” of atrocities committed by the L.R.A. — all in the span of one sentence. Oddly, he later says that the group “claims” to be Christians, undermining the premise of his initial argument about the absurdity of “killing” them off.

Have a listen to Limbaugh’s comments for yourselves, via The Rush Limbaugh Show: