Republican Debate: 25 Things To Look For 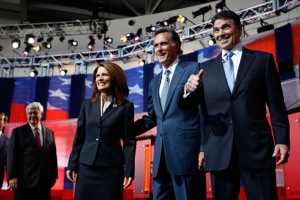 Mediaite’s staff has seen enough debates already to last us several election cycles. Tonight’s CNN seven-candidate powwow (8:00 p.m. Eastern), moderated by Anderson Cooper, probably won’t do much to differentiate itself from the previous ones, but we’re still holding out hope that something — anything — spontaneous happens. Here, in no particular order, are some things we’re looking and hoping for during tonight’s Sin City gathering of the GOP candidates.

1. Will the audience clap for electrifying Mexicans? – Jon Nicosia

2. Will there be a 7-way race to devise the deadliest Dr. Evil/Wile E. Coyote contraption to stick on a border fence? – Tommy Christopher

5. I expect to see many more 9-9-9 jokes, though most will fall so flat, that the net result will be Herman Cain taking a larger lead in the polls. – Colby Hall

6. I’ll be watching for an incisive deconstruction of what differentiates these contenders as well as a look into who they are as people and what their lives were like before this all began. Also, the kind of pithy one liners that only Simon Cowell can deliver.
…Wait, what are we watching tonight? – Jon Bershad

7. Which candidate will be the first to utter the word “care” without the prefixes “Obama” or “Romney?” – TC

8. Which inevitable gotcha question from Anderson Cooper will launch Newt Gingrich into a tirade where he forgets who on stage is actually running for president? – FM

9. Recognizing that the only time he seems to get media attention is after he aggressively questions the debate moderator, expect Newt Gingrich to get in the face of Anderson Cooper, perhaps even making his point with a poke to to his sternum with his forefinger. – CH

10. How many times will Newt Gingrich… Nope, I got nothing. – AA

11. Michele Bachmann‘s French-tip nails: How distractingly long will they be? – Nando Di Fino

12. Will Rick Perry be heavily caffeinated? Will we see a visible, 32 ounce Monster Energy Drink by his side? I’m anticipating his handlers will be shooting Red Bull into his veins. – James Crugnale

13. If someone asks another hypothetical about a comatose patient, which candidate will say, “That’s no way to talk about Gov. Perry?” – TC

14. Will Rick Perry begin speaking in Esperanto at random intervals throughout the debate? Maybe definitely. – AA

15. That Sue Sylvester will do something cur-razy! Wait, that show’s not on this week. Seriously, guys, what are we watching? – JB

16. Razing Cain: Now that he’s had some time as frontrunner, how many more hits will Herman Cain take tonight? – TC

17. What classic rock tune will Herman Cain rewrite as an ode to pizza? My money is on “Hotel California.” – FM

18. How many of my Herman Cain puns will Jon Huntsman rip off? – TC

19. When will Tommy, or anyone else, notice that Huntsman’s not there? – FM

20. A shirtless Haley Barbour will storm the debate stage with “Soy Bomb” emblazoned across his ample chest. – CH

21. Breaking Bad‘s over. Community and Parks are on Thursday. I genuinely have no idea. – JB

22. Michele Bachmann will on more than one occasion attempt to conflate President Obama‘s alleged belief in socialism with the Occupy Wall Street protesters. – CH

24. Mitt Romney will again be razor sharp in his responses, more likable than he’s been in any previous debate and even get a surprising number of laughs with some out-of-character witty asides. This will result in more GOP hand-wringing about who else should get into the race. – CH