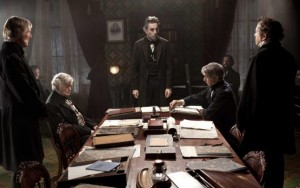 Recently, Rep. Joe Courtney (D-CT) wrote to Lincoln director Steven Spielberg, with a bone to pick about historical accuracy. Namely that, in the movie, three members of Connecticut’s state delegation voted against the Thirteenth Amendment abolishing slavery — when in reality, all four representatives voted in favor of it. The movie’s screenwriter, Tony Kushner, responded.

“Rep. Courtney is correct that the four members of the Connecticut delegation voted for the amendment,” Kushner wrote, per The Wall Street Journal. “We changed two of the delegation’s votes, and we made up new names for the men casting those votes, so as not to ascribe any actions to actual persons who didn’t perform them.”

Kushner also noted that any changes made were “made to clarify to the audience the historical reality that the Thirteenth Amendment passed by a very narrow margin that wasn’t determined until the end of the vote.”

“I’m sad to learn that Rep. Courtney feels Connecticut has been defamed,” he added. “It hasn’t been.”

“I could not believe my own eyes and ears,” Courtney previously wrote in the letter to Spielberg. “How could Congressmen from Connecticut — a state that supported President Lincoln and lost thousands of her sons fighting against slavery on the Union side of the civil war — have been on the wrong side of history?”

Kushner’s full letter below, via The Wall Street Journal:

A RESPONSE TO REPRESENTATIVE JOSEPH COURTNEY

Rep. Courtney is correct that the four members of the Connecticut delegation voted for the amendment. We changed two of the delegation’s votes, and we made up new names for the men casting those votes, so as not to ascribe any actions to actual persons who didn’t perform them. In the movie, the voting is also organized by state, which is not the practice in the House. These alterations were made to clarify to the audience the historical reality that the Thirteenth Amendment passed by a very narrow margin that wasn’t determined until the end of the vote. The closeness of that vote and the means by which it came about was the story we wanted to tell. In making changes to the voting sequence, we adhered to time-honored and completely legitimate standards for the creation of historical drama, which is what Lincoln is. I hope nobody is shocked to learn that I also made up dialogue and imagined encounters and invented characters.

I’m proud that Lincoln’s fidelity to and illumination of history has been commended by many Lincoln scholars. But I respectfully disagree with the Congressman’s contention that accuracy in every detail is “paramount” in a work of historical drama. Accuracy is paramount in every detail of a work of history. Here’s my rule: Ask yourself, “Did this thing happen?” If the answer is yes, then it’s historical. Then ask, “Did this thing happen precisely this way?” If the answer is yes, then it’s history; if the answer is no, not precisely this way, then it’s historical drama. The Thirteenth Amendment passed by a two-vote margin in the House in January 1865 because President Lincoln decided to push it through, using persuasion and patronage to switch the votes of lame-duck Democrats, all the while fending off a serious offer to negotiate peace from the South. None of the key moments of that story—the overarching story our film tells—are altered. Beyond that, if the distinction between history and historical fiction doesn’t matter, I don’t understand why anyone bothers with historical fiction at all.

I’m sad to learn that Rep. Courtney feels Connecticut has been defamed. It hasn’t been. The people of Connecticut made the same terrible sacrifices as every other state in the Union, but the state’s political landscape was a complicated affair. The Congressman is incorrect in saying that the state was “solidly” pro-Lincoln. Lincoln received 51.4% of the Connecticut vote in the 1864 election, the same kind of narrow support he received in New York and New Jersey. As Connecticut Civil War historian Matthew Warshauer has pointed out, “the broader context of Connecticut’s history doesn’t reflect what Courtney had said in his letter. The point is we weren’t unified against slavery.” We didn’t dig into this tangled regional history in Lincoln because a feature-length dramatic film obviously cannot accommodate the story of every state, and more to the point, because that’s not what the movie was about.

I’m sorry if anyone in Connecticut felt insulted by these 15 seconds of the movie, although issuing a Congressional press release startlingly headlined “Before The Oscars…” seems a rather flamboyant way to make that known. I’m deeply heartened that the vast majority of moviegoers seem to have understood that this is a dramatic film and not an attack on their home state.