Lost Together: Takes From Around The Web 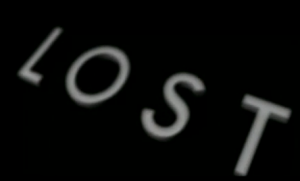 Lost is now over. The final episode of the final season of the six-year long series drew millions of diehard fans and critics, who every week would scratch their heads and try to figure out what the hell polar bears, hatches, Smoke Monsters, backgammon, and the numbers 4, 8, 15, 16, 23, and 42 all had to do with each other. After tonight’s series closer, it doesn’t seem that we’re any closer to those answer — frustrating, seems to be the general consensus, but tempered with the equally general consensus that it sure was fun getting there. Here’s some reactions from around the web after the finale:

So what was the island? Those who have been voting for purgatory all along can make a case, though it seems highly unlikely that the creators had anything so specific in mind. Fans and commentators will go through all sorts of twists and turns to make sense of the ending. From here, it seems that if everyone is dead, the only thing that makes sense — if that’s a requirement — is that everyone was dead at the beginning. 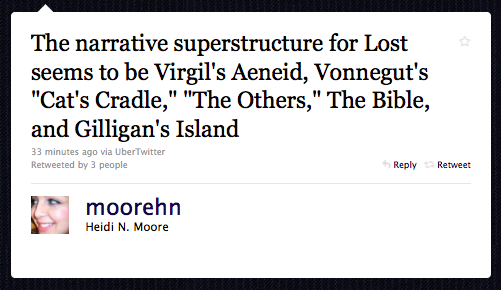 There’s a lot of freaked out discussion about Christian Shephard’s afterlife goodness, questions about purgatory, and a general enraged sense that none of this made any sense at all.

— Emily Nussbaum, The Lost Finale: What Did You Think? [Vulture]

Who created the alternate world? Why are we all pretending like this makes any sense? 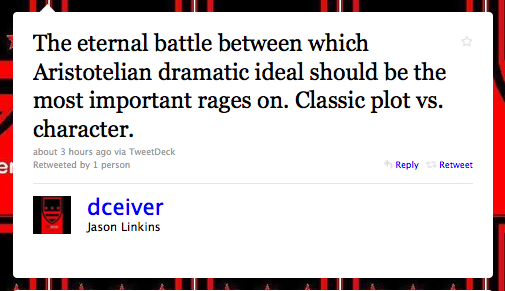 Watching “Lost” has been a bit like being pregnant. The thrill of discovery, followed by the delight of watching a nascent form evolve into something real. Then the long delightful exhausting middle months, until it came down to a few final weeks, fueled by fevered anticipation and the wretched, bloated desire to just get the dang thing over with.

If, as some said, “Lost” was to be judged by its finale then all I can say is Damon and Carlton pulled it off. I’ve been crying and laughing and basically an emotional basket case for the last 2.5 hours. I could not possibly have asked for anything more. I am in awe. 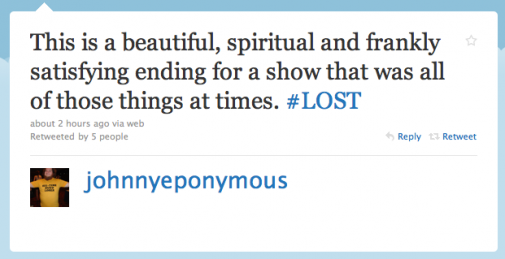 Lost ended tonight, and with it the hopes and dreams of millions of people who thought it might finally get good again. SPOILER ALERT: It didn’t. What did we learn? Nothing. We learned nothing from two-and-a-half hours of slow-motion bullshittery backed with a syrupy soundtrack.

“To the well organized mind, death is but the next great adventure.”

Here is a song that would probably do nicely set over some slow-mo montages of all the loverly reunions tonight. Internet, get to work.