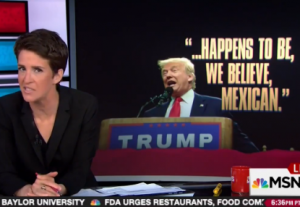 In 2012, the media had a grand old time hanging Rick Santorum out to dry for his comments on “blah people.” Mediaite was among those who couldn’t get enough of the story. After all, the perceived subtle racism seemed shocking at the time.

Tonight on her show, Rachel Maddow reminded viewers of that incident. Then, she brought up the time in 2006 when former Virginia senator George Allen randomly picked an Indian man out of a crowd at a campaign event and called him “Macaca” before saying, “Welcome to America and the real world of Virginia.”

That man, as it turns out, was born in Virginia. Again, this was shocking at the time, but as Maddow replayed the videos, she commented sadly, that they’re not shocking now.

Maddow then played footage of Donald Trump blasting the judge who ruled against him in the Trump University lawsuit, Gonzalo Curiel. Trump brought up the fact that he thinks, based on his name, that the judge is of Mexican descent, which has gotten people talking.

The judge, just like the young man Allen called Macaca, was born in America. He’s originally from Indiana. Maddow sighed as she reported this, saying that Trump’s overtly racially biased talk has been going on for months and is the new normal in a political arena full of people who used to be shocked by much vaguer racism.

She capped off the segment by letting the audience know that the head of Hispanic media relations at the RNC has resigned. Her name is Ruth Guerra and, like former communications chairwoman of the Young Republicans National Federation Katrina Jorgensen, she left her position because she refused to be affiliated with the things Trump has said about Latinos.