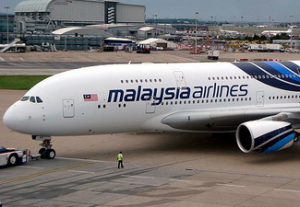 Malaysia Airlines put out a public statement earlier tonight saying that they lost contact with a B777 plane en route to Beijing with 227 passengers and 12 crew members aboard.

The airline says that the plane was supposed to land in Beijing in the early morning but it never showed up. Authorities have sent out a search and rescue team to find the missing plane.

Boeing also put out a statement that they’re “closely monitoring” reports on the aircraft.

UPDATE: Flightradar24.com, a site that tracks all air traffic in real time, put out a few tweets with pictures of the flight path and where they lost contact.

Flight #MH370 disappeared from Flightradar24 at 17.19UTC time between Malaysia and Vietnam pic.twitter.com/BtmTuQGBq6

Playback of flight #MH370 can be found on http://t.co/AMSjFiuQKQ pic.twitter.com/9tLZuG41XI

UPDATE #2: Malaysia Airlines confirms there were four Americans on the plane, one of whom is an infant.

UPDATE #3: Malaysia Airlines put out another statement with more details about the flight, the nationalities of everyone on board, and the identities of the pilot and first officer on the plane.

UPDATE #4: Contrary to reports by some media outlets, a Vietnam rescue official tells Reuters they have not picked up a signal from the plane yet.

UPDATE #5: As of Saturday morning, Vietnamese air force planes have “spotted two large oil slicks,” suggesting that the plane may have crashed.

Watch the report via CBS News: