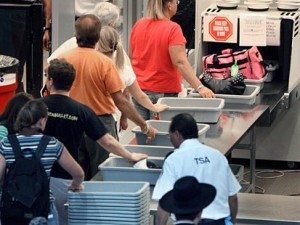 In one of the more unusual cases of airport security gone overboard, a man trying to board a flight at San Diego International Airport refused a patdown when he felt it was bordering on sexual assault. From there, he was told he could not board his flight, was interrogated by several different TSA agents, escorted out of the airport, and then in a turn of events, told that if he left the airport without completing the security screening he could face a civil suit and find of up to $10,000. But because this is 2010, he filmed the entire encounter using his mobile phone, posted the videos to YouTube, and blogged about the entire ordeal.

He then wrote a lengthy blog post detailing the entire account on his personal blog, including three short videos that he captured throughout the affair:

We both stood there for no more than probably two minutes before a female TSA agent (apparently, the supervisor) arrived. She described to me that because I had opted out of the backscatter screening, I would now be patted down, and that involved running hands up the inside of my legs until they felt my groin. I stated that I would not allow myself to be subject to a molestation as a condition of getting on my flight. The supervisor informed me that it was a standard administrative security check and that they were authorized to do it. I repeated that I felt what they were doing was a sexual assault, and that if they were anyone but the government, the act would be illegal. I believe that I was then informed that if I did not submit to the inspection, I would not be getting on my flight. I again stated that I thought the search was illegal. I told her that I would be willing to submit to a walk through the metal detector as over 80% of the rest of the people were doing, but I would not be groped. The supervisor, then offered to go get her supervisor.

And that’s just a bit of it — the entire story goes on and involves the man having to speak to several more TSA agents, officers, and other officials before finally being allowed to leave — but not being allowed to board his flight. Watch the videos here: