Martin O’Malley Is Caught in The Wrong Multiverse

Martin O’Malley Is Caught in The Wrong Multiverse 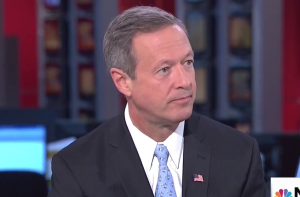 Alternate realities are largely hypothesized under the multiverse theory, or in other words, another version of our world where you’re the person who won last night’s $310 million Powerball. If you’re reading my column today, I can safely assume you did not.

In one of these strange fringe existences, nothing is the same. LeBron never left Cleveland in the first place, Brokeback Mountain won the Oscar in 2006, federal troops were expedited to aid in Katrina aftermath… you know, the stuff of fantasy.

But in this world, the same one where no one remembers the movie Crash, the Presidential race for the 2016 election looks radically different. And that’s because sitting atop every national poll sits the handsomely presidential Martin O’Malley, the former Maryland Governor who as of October 1st, 2015 seems like a shoo-in to follow President Barack Obama (yes, even in this multiverse, Obama stole Hillary Clinton’s thunder in 2008, sorry).

In this alternate world… Martin O’Malley has already dominated the show at all five Democratic debates (again, fantasy). Democrats and Republicans alike have a hard time finding bad things to say about the smooth guitar-playing rock star born in the Beltway, and BuzzFeed has already done multiple “Top Adorable Things About Martin O’Malley” viral pieces.

Hillary Clinton is a distant second place on the minds of the electorate; the local Bernie Sanders gathering at the community center dims compared to the roar from O’Malley’s star-studded concert/pep rally to 85,000 strong at Cowboys Stadium.

And what’s not to love about O’Malley, whose fan base has preemptively gotten “45” tattoos in anticipation of the inevitable? He strikes to the heart of American hope, with his chiseled jawline, good-natured persona, and charismatic love of selfies. The perfect blend of Reagan‘s smile and FDR’s policies, when he speaks about his executive experience, the American people listen. After all, he has just raised the minimum wage in Maryland to $10.10, legalized same sex marriage in 2012, and his only enemy is the NRA, who knows he is one of the most progressive elected officials advocating for gun control (for the record, these O’Malley achievements exist in this reality too, the one where Brokeback lost).

The man is the ultimate establishment candidate, and has won over every major Democratic voting demo; what few doubters remain in the United States are quickly swayed when he announces Massachusetts Senator Elizabeth Warren as his Vice Presidential running mate. Pope Francis demands a private meeting with the devout Roman Catholic; thankfully, when you Google “Kim Davis” in this world nothing materializes.

Back to our reality. Watching Martin O’Malley on yesterday’s MTP Daily made me wonder if O’Malley was sitting in the greenroom, well-coiffed head of hair dangling hopelessly in his hands, dreaming of that alternate world. Instead, the actual O’Malley interview was short, and host Chuck Todd used it more to kill time while awaiting a John Kerry address to the media. You could almost see Todd staring at his off-screen monitor, ready to cut off O’Malley at a moment’s notice; O’Malley: the man who can hardly get a headline in this reality, the man who can’t even get his interview posted on the MTP Daily homepage, the man left dreaming of a world where he’s top Dem.