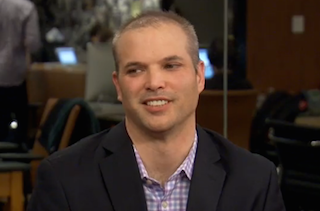 Back in February, reporter Matt Taibbi announced that he was leaving his long-time mantle at Rolling Stone to launch a new publication called The Racket as part of eBay founder Pierre Omidyar’s First Look Media. Nine months later, Taibbi has left the company without ever publishing a story on the still-non-existent site.

Today, Taibbi spoke out about his departure for the first time during an interview with HuffPost Live. His latest story, about a whistleblower from JPMorgan Chase, was supposed to be the first major piece for The Racket. Instead, it was published this week at his old home, Rolling Stone.

“Obviously that whole episode was a really sad thing,” Taibbi said of his time with First Look Media, adding that he’s not really allowed to talk about it. “I am sad that it didn’t work out.”

Last week, Taibbi’s former First Look colleagues, Glenn Greenwald, Laura Poitras, Jeremy Scahill and John Cook published an in-depth account of the circumstances surrounding his departure on The Intercept. According to them, Taibbi and Omidyar clashed over a number of issues, including management style and budget. They also describe Taibbi as “combative” and “abrasive.”

Asked if he agrees with conclusions made in the Intercept piece, Taibbi again declined to comment, saying he does not believe it’s appropriate to speak about a former employer. He said he does not yet have a permanent home at Rolling Stone or anyone else, but added, “I miss being at work, so it’s great to be back at work, for sure.”