Mattress Company Would Like to Forget This Offensive ‘Twin Towers’ Commercial 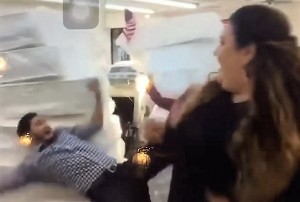 It will always be “too soon” for some things, it seems. A premise that stand-up comics once only joked about has come to pass, as a San Antonio, Texas mattress store has come under fire for a local online commercial video advertising a 9/11-themed holiday sale that features a “Twin Towers” pricing scheme whereby every size mattress is sold at the “twin price,” and a slapstick reenactment of the fall of the Twin Towers. The ad even finishes with the store’s manager intoning “We’ll never forget”:

Needless to say, people weren’t pleased, and after receiving death threats, Miracle Mattress was closed briefly. They’ve since apologized, and are going on with the sale this weekend, minus the holiday theme:

Cherise Bonanno apologized in an interview with WOAI-TV.

“It was stupid,” she said. “It was a stupid idea that we sent out, and we apologize for our stupidity, and we really hope you forgive us for what we’ve done.”

The San Antonio television station reported that Miracle Mattress closed Thursday after receiving death threats but would be holding a sale this weekend — no longer calling it a “Twin Towers Sale” — and that 30 percent of its sales would be donated to a 9/11 charity.

“We are not hate; we are love,” Cherise Bonanno said. “We’re Miracle Mattress. We make miracles happen.”

It’s all a matter of context, though. During the recent Comedy Central Roast of Rob Lowe, several of the comics made jokes about Pete Davidson‘s late father, who was killed in the attacks, including one who joked that “This isn’t the roast of Pete Davidson’s father. That was in 2001.”