May Jobs Report Shows 175,000 Jobs Added, Unemployment Ticks Up A Tenth Of A Point

May Jobs Report Shows 175,000 Jobs Added, Unemployment Ticks Up A Tenth Of A Point 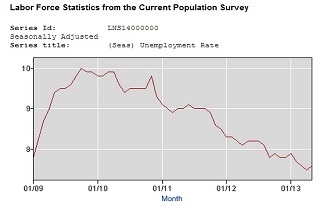 On Friday morning, the Bureau of Labor Statistics released its May jobs report, and the news is about what we have come to expect the past several years: a continuation of the slow, steady climb out of the Great Recession. The economy added 175,000 jobs, slightly better than expected, but the unemployment rate ticked up slightly to 7.6%, from 7.5% in April. May’s jobs report also included revisions of prior months numbers, which resulted in a net negative revision of 12,000. From BLS:

The number of jobs added was greater than the 163,000 that experts expected, but the manufacturing sector lost 8,000 jobs when it was expected to gain 4,000.

While Congress’ Hearings-Based Jobs Program has failed to take off, the steep spending cuts they have pushed for, up to and including the sequester, continued to be a drag on the economy:

Here’s the full jobs report, from the Bureau of Labor Statistics:

THE EMPLOYMENT SITUATION — MAY 2013

Total nonfarm payroll employment increased by 175,000 in May, and the unemployment
rate was essentially unchanged at 7.6 percent, the U.S. Bureau of Labor Statistics
reported today. Employment rose in professional and business services, food services
and drinking places, and retail trade.

Both the number of unemployed persons, at 11.8 million, and the unemployment rate, at
7.6 percent, were essentially unchanged in May. (See table A-1.)

The civilian labor force rose by 420,000 to 155.7 million in May; however, the labor
force participation rate was little changed at 63.4 percent. Over the year, the labor
force participation rate has declined by 0.4 percentage point. The employment-population
ratio was unchanged in May at 58.6 percent and has shown little movement, on net, over
the past year. (See table A-1.)

In May, the number of persons employed part time for economic reasons (sometimes referred
to as involuntary part-time workers) was unchanged at 7.9 million. These individuals were
working part time because their hours had been cut back or because they were unable to
find a full-time job. (See table A-8.)

In May, 2.2 million persons were marginally attached to the labor force, down from 2.4
million a year earlier. (These data are not seasonally adjusted.) These individuals were
not in the labor force, wanted and were available for work, and had looked for a job
sometime in the prior 12 months. They were not counted as unemployed because they had not
searched for work in the 4 weeks preceding the survey. (See table A-16.)

Among the marginally attached, there were 780,000 discouraged workers in May, little
changed from a year earlier. (These data are not seasonally adjusted.) Discouraged
workers are persons not currently looking for work because they believe no jobs are
available for them. The remaining 1.4 million persons marginally attached to the labor
force in May had not searched for work for reasons such as school attendance or family
responsibilities. (See table A-16.)

Total nonfarm payroll employment increased by 175,000 in May, with gains in professional
and business services, food services and drinking places, and retail trade. Over the
prior 12 months, employment growth averaged 172,000 per month. (See table B-1.)

Within leisure and hospitality, employment in food services and drinking places continued
to expand, increasing by 38,000 in May and by 337,000 over the past year.

Retail trade employment increased by 28,000 in May. The industry added an average of
20,000 jobs per month over the prior 12 months. In May, general merchandise stores
continued to add jobs (+10,000).

Employment in other major industries, including mining and logging, construction,
manufacturing, wholesale trade, transportation and warehousing, and financial activities,
showed little or no change over the month.

The average workweek for all employees on private nonfarm payrolls was unchanged in
May at 34.5 hours. In manufacturing, the workweek increased by 0.1 hour to 40.8 hours,
and overtime was unchanged at 3.3 hours. The average workweek for production and
nonsupervisory employees on private nonfarm payrolls increased by 0.1 hour to 33.8
hours. (See tables B-2 and B-7.)