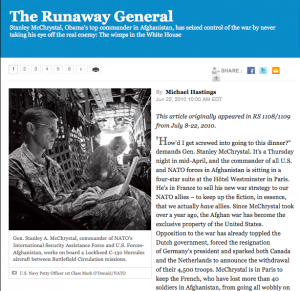 One of the big questions people are asking today about Rolling Stone‘s stunning story about General Stanley McChrystal is this: How could he have said all that to a reporter? Rolling Stone maintains absolutely that all comments were on the record. So honestly: What was he thinking?

NBC’s Richard Engel, the network’s chief foreign correspondent, has what sounds like the best possible explanation: McChrystal sort of forgot that the reporter was a reporter.

For real. Earlier today on MSNBC, Engel told anchor Chris Jansing and NBC chief Pentagon correspondent Jim Miklaszewski that he’d just spoken to Michael Hastings, who wrote the Rolling Stone piece, and Hastings had told him that what had been planned as two short stints with McChrystal had turned into a month-long extended process, almost like an embed — thanks to Iceland’s Eyjafjallajokull volcano. Per Engel:

“I just hung up the phone with Michael Hastings who wrote the article for Rolling Stone and – he said it was something of an accident -this article was never meant to be like this. What happened was, Michael Hastings presented this idea to the military, to McChrystal’s military advisors, media advisors, saying ‘I want to do this profile’…they agreed, and he was supposed to have two days with him in Paris and then followed up another visit in Afghantistan.”

The article opens with the General in Paris — but then the ash cloud hit. Per Engel, Hastings’ two-day visit with McChrystal turned into a ten-day trip as they were all stuck together in Europe, which “was extended to a month,” probably as they all shipped back out from Paris to Afghanistan.

Does that explain why McChrystal would lapse and go off like that in front of a reporter? Well yes and no, depending on how comfortable you get with a now-veteran military reporter who’s been hanging around for a month. Said Engel, “He ended up spending a lot of time as a fly on the wall and got to know them quite well.” According to Engel, Hastings maintains that it was all on the record and that he was always around with either a tape recorder or a notebook — so maybe it was just all about blending into the backround and looking like he belonged. Or maybe it was a sort of reverse Stockholm Syndrome. Or maybe McChrystal thought, “This guy is solid, we can trust him.” Or maybe McChrystal wasn’t thinking at all. Either way, Hastings got his story and has a volcano to thank for it. McChrystal, not so much.

Video below – Engel comments are toward the end.