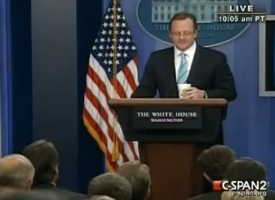 The recent criticism by General Stanley McChrystal of the Obama Administration’s policy in Iraq was a very hot topic during today’s White House press briefing. And judging by the grave tone and open responses of Press Secretary Robert Gibbs, the General’s future in his current role appears to be uncertain at best. When asked by CBS’ Chip Reid if removing the General from his position was an option, Gibbs’ tersely replied “I would say all options are on the table.”

When pressed by Reid if Gibbs agreed that McChrystal’s was “a fireable offense,” Gibbs’ responded in even more strident terms, saying “I think the magnitude and the graveness are profound.”
The President took everyone to task last year for as you said the leaks that were coming out of those meetings. He said there’s a reason that we don’t have those meetings at Starbucks that we have them in the situation room.”

Gibbs revealed just how serious the White House is taking this issue, by concluding this particular back-and-forth in the most grave manner possible, saying “he takes this seriously because he has made a life or death decision to put people in harm’s way and we owe it to those men and women – some of whom are serving their third or fourth term in Iraq – we owe them their very best.

Earlier today, Lt. Col Tony Shaffer claimed during an appearance on Fox News that names of a potential replacement are already being floated, adding “which is never a good sign” for his former military colleague.