Meghan McCain Unfollowed Rep. Weiner On Twitter Because Her Mom Was ‘Uncomfortable’ About It 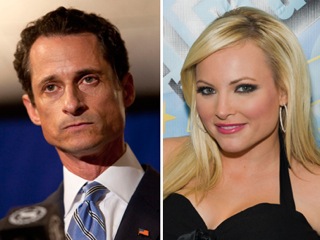 Meghan McCain has finally come clean of her interactions on Twitter with Rep. Anthony Weiner, all of which were public and completely appropriate. McCain is one of the last people to be cited by name in his Twitter feed during the scandal, as she had kind words for the Congressman in the press. Her latest Daily Beast column may have severed that mutual respect, however, as she confesses she no longer follows him to preserve her mother’s peace of mind.

In one of the more brilliant headline teases to come out of the “Weinergate” scandal, McCain entitled her article “Anthony Weiner Tweeted Me,” though of course nothing of the sort that headline would suggest is present in the facts. That said, they did have some Twitter rapport after she had spoken about him in the New York Times— he followed her and publicly thanked her in appreciation. She returned the favor with a follow. “His tweet has since been retweeted to me a lot this week,” she writes, “with a lot of bad puns and poor constructed jokes attached.” Despite this, she weaves in some not-so-obvious double entendres herself– noting that she was impressed by “his use of the hashtag”– but she does also profess a legitimate admiration for his candor on the social networking site, as well as his “rants” on YouTube and his ability to connect so personally through the internet.

That said, the life and times of @RepWeiner on Meghan McCain’s newsfeed are over: “By the way, I no longer follow Congressman Weiner on Twitter at the request of my mother. She said it made her uncomfortable.”