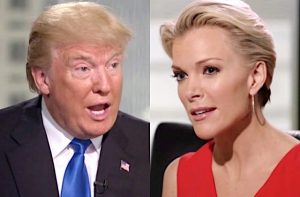 Fox News superstar Megyn Kelly is out with a new book this week. It apparently has some interesting revelations which have led to some rather provocative speculation about what really transpired when Donald Trump was winning the Republican presidential nomination, which of course led to him capturing the presidency. It’s a real shame that Kelly didn’t have a major platform from which she could have shared this information with millions of people BEFORE history was forever altered, possibly rather dramatically.

Oh wait. Actually, I guess since she is at least somewhat of a journalist and has her own primetime television show on Fox News Channel, she could have broadcast these relevant news items on that program. Except during the primaries accused serial sexual harasser and Trump buddy Roger Ailes was still her boss, and then during the general election virtually her entire network was on board the Trump Train, so it must not have been in her self-interest to do so (after all, criticizing Trump on Fox News might have cost her a ratings point or two).

Of course, if she had spilled these beans when they mattered, she might have jeopardized a huge new contract negotiation, and what would she have had left over for a post-election book for which she has been paid millions of dollars (effectively by the same company she works full-time)? You see, in an era where celebrity/money are everything and truth/ethics are nothing, journalism is as dead as Hillary Clinton’s presidential prospects.

While I like Megyn Kelly in many ways, it seems to me that she has handled this whole Trump controversy in a very self-serving and ethically-challenged manner. That’s not to say that she was in a remotely easy position, but it appears obvious that her primary considerations during all of this have been what is best for her career, while the concept of what is in the best interests of journalism and the public’s right to know was about as important to her as Trump currently views the significance of a request from John Kasich.

The most interesting disclosures about Trump in her book seem to be either bombshells or misunderstandings, depending on when and where Kelly is discussing them. The New York Times interpreted her tone as strongly suggesting she may have been poisoned before the first GOP debate and that Trump had prior knowledge of her critical first question that night about his treatment of women. Kelly has confirmed that Trump tried to curry favor with her and other “journalists” with overt and inappropriate gifts.

Kelly has denied the New York Times interpretation of the debate stories in her book (then why put those implications in there in the first place?), but even her suspicions about these matters are relevant to understanding how and why this whole crazy election was allowed to transpire the way that it did. For instance, in retrospect, I truly believe that Trump’s remarkable answer to that very first GOP debate question effectively put him in position to win the Republican nomination.

When Trump instantly responded (inaccurately) “only Rosie O’Donnell!”, it simultaneously diffused a potentially lethal issue, made it clear that he was different from any other candidate, and allowed him to bond with skeptical conservatives by showing they had a common liberal enemy. If Trump knew that question was coming, it completely changes the context of that answer. It also, especially if Kelly really was “poisoned” that day on Trump’s behalf, raises extremely grave concerns about the nature of the very favorable coverage/treatment Trump got from Fox News, which was absolutely critical to him winning the nomination.

In my view, Kelly had an ethical obligation to expose these issues and concerns back when her viewers were still trying to assess a potential Donald Trump presidency. Yesterday on the Today Show she was rightly asked about these glaring omissions from her coverage of the primary and general election campaigns, and she absurdly claimed that since the “Billy Bush” tape didn’t stop Trump, nothing she could have said would have done so either.

Let’s count the number of ways that is an embarrassingly inadequate explanation for an opinion “journalist” withholding relevant information from her audience.

First, that’s not her call to make. A referee in a sporting contest doesn’t decide not to declare a clear penalty early in a game and claim later that the missed call wouldn’t have impacted the outcome of the contest (especially when Trump’s margin for error was very thin in both the primary and the general elections).

Second, she has no way of knowing that is true. If the narrative had been set in the fall of 2015 that Roger Ailes and Fox News Channel were doing dastardly deeds on Trump’s behalf, that could have had a serious impact on the still very vulnerable Trump campaign and diminished the network’s power to push him (similarly, if conservatives had known then just how deeply Breitbart.com was in the tank for Trump, many would have rightly discounted their reporting on the primaries completely).

Third, the idea that it is morally acceptable for a “journalist” to withhold potentially important information from the public because it might not be good for their career at that moment, or that they have rationalized that it wouldn’t have definitely impacted the outcome, is an incredibly dangerous precedent. I’m not nearly naïve enough to think that Kelly is remotely the first “journalist” to do this, but when it is this overt, and the potential consequences are so dramatic, it is extremely important for the entire industry to condemn this practice before it quickly becomes fully accepted as standard operating procedure.

It appears that, instead of telling the public everything she knows about the man who will likely change our politics for the foreseeable future and then let the chips fall where they may, Kelly has played every turn of “Trumpsanity” for her own career benefit. In fact, only Joe Scarborough has had a more “nuanced” on-air relationship with Trump than Kelly has.

Her feud with Trump, while she did endure social media bullying, raised her profile and mainstream credibility. But then she made up with him just in time to get him as a guest for a soft-ball interview on her failed Fox network special (in which, amazingly, she promoted all the truths which she would reveal AFTER the election in her coming book). Then, during the general election, she went from hot to cold on Trump (coincidently, I am sure) in conjunction with Trump’s poll numbers, famously taking on Newt Gingrich just before the FBI decided to throw the seemingly determined election into chaos.

The most remarkable element of the book which Kelly withheld from her audience during her election coverage was that Roger Ailes, who had dictated positive coverage for Trump in the primaries, and who was advising him in the general election, had allegedly sexually harassed her on multiple occasions and in despicable fashion. What made this even more relevant to the campaign was the fact that Trump’s two biggest Fox News boosters, Bill O’Reilly and Sean Hannity, had strongly backed Ailes and effectively called the accusers liars when the allegations (not publicly from Kelly at the time) first erupted against him.

Now, not surprisingly, O’Reilly, who is famously protective of his turf as the big ratings dog of the network, has essentially attacked Kelly for daring to air the network’s dirty laundry. Think about that. If the Obama administration condemned someone from within it for telling a negative truth about their leader, O’Reilly would rightly go apoplectic about the lack of transparency and the disregard for the public’s (you know, with Bill, it’s all about the “folks”) right to know what really happened. But because he is jealous of Kelly, probably feels uncomfortable that he was dead wrong to back Ailes “100%,” and sees a personal political advantage in making Kelly seem disloyal to the company, being a blatant hypocrite is a very small price to pay. I hope (but doubt) that his audience remembers Bill’s standards for what should be kept from them as he covers his “milkshake” buddy Trump for the next four years.

For her part, Kelly’s rebuttal to O’Reilly, that it is Ailes who made the company look bad, is absolutely accurate. However, if the purpose of Fox News is really based on its slogan “We Report, You Decide,” then Kelly herself has also shamed opinion journalism (as difficult as that is to do these days) with her withholding of key information on both Trump and Ailes in order to sell a post-election book while negotiating a new contract.

Of course, since cable news, especially post-Trump, is now officially just an entertainment business whose only goal is to get a large enough audience on any given day to make money, Kelly’s actions are unlikely to cause even a ripple of concern and will likely work out quite well for her.

The only truths which matter these days are those which are clearly profitable and good for the careers of those who tell them. A truth which is unpopular to one’s audience is worthless, while a lie which makes them feel good might as well be gold.

Not coincidentally, that’s how we ended up with President Donald Trump.
— —