Are Michele Bachmann's Misstatements Catching Up To Her?

Michele Bachmann’s Misstatements Finally Catching Up To Her? 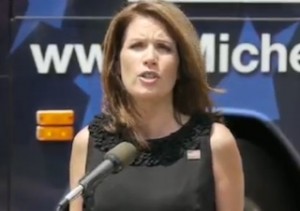 According to the Real Clear Politics poll aggregate, Michele Bachmann is now sitting in sixth place, with an average of 4.8% support across several polls. It’s a far cry from July, when the congresswoman peaked with 14%, putting her in second place behind Mitt Romney. So what happened in three months? While the rise of Herman Cain siphoned off some of her voters, and the candidacy of Rick Perry took a chunk from her conservative base,a story Sunday in the Los Angeles Times, by Seema Mehta, suggests that Bachmann may be doing this to herself: a series of speaking misquotes and number-jumbling might be driving voters away. “All politicians occasionally shade the facts to their advantage,” Mehta writes. “The danger for Bachmann is that her misstatements are so pronounced and so numerous that they erode her effort to regain footing in the presidential race.”

Bachmann’s propensity to make head-scratching statements are nothing new. In 2009, The Week featured ten videos in which Bachmann made some questionable remarks. In fact, Bachmann offered up a mini-gaffe when she announced her candidacy, by confusing the birthplaces of John Wayne and John Wayne Gacy (Bachmann had said that Wayne was born in Waterloo, Iowa — Gacy, the serial killer, was born in Waterloo; Wayne was born three hours away. However, to her credit, Wayne’s parents met in Waterloo).

Mehta didn’t write the article to have a laugh at Bachmann’s expense; she sincerely believes that the incorrect statements in Bachmann’s speeches might point to a certain brand of sloppiness in fact-checking that’s turning voters off. “Voters [in Iowa] frequently say they are drawn to support Bachmann’s presidential campaign by the litany of statistics and facts that stud her speeches,” she writes. “Yet what she says is often inaccurate, misleading or wildly untrue.” And Mehta suggests that Bachmann, if she were to just stop while she were ahead, might have a different fate. Among Bachmann’s biggest misstatements was her assertion to Greta Van Susteren, on national television, that the vaccines administered in Texas under Gov. Rick Perry caused mental retardation. This came after an especially admirable debate performance moments earlier where Bachmann took Perry to task for the vaccination and for his ties to the drug company that provided all the shots. Bachmann, again, to her credit, was just working off the information she had — a crying mother approached her and told her what happened to her daughter. Bachmann could have tucked that one away, done some fact-checking, and then decided to use it the next alongside facts that stated there wasn’t much evidence to support the claim (while emphasizing that this was one woman’s story). Instead, she whipped it out in a post-debate interview, attempting to go for the knockout punch, and it backfired: she was hammered mercilessly by physicians and media alike. She tried to clarify her remarks to Sean Hannity the next day on his radio show, saying she had no idea if the woman was telling the truth. “I am not a doctor. I am not a scientist. I am not a physician. All I was doing was reporting what a woman told me last night at the debate.”

If Bachmann only made her fair share of misstatements, this might all be swept under the rug. But she seems to do this frequently. Mehta’s article, if she listed every gaffe Bachmann made, could have been much longer. And some of this, whether it’s intentional or not, might just be Americans subtly seeing her — an attractive female Republican presidential candidate with a bit of a northern accent flubbing lines and shouting out inaccuracies — as an extension of Sarah Palin and her, “I can see Russia from my backyard,” infamy. But it might be unfair. After FOX’s Chris Wallace suggested she was a flake earlier this year, she responded with a list of reasons why she may be smarter than we give her credit for: “I’m 55 years old. I’ve been married 33 years,” Bachmann told ABC News, in response to the “flake” comments. “I’m not only a lawyer, I have a post-doctorate degree in federal tax law from William and Mary. I’ve worked in serious scholarship. … My husband and I have raised five kids, we’ve raised 23 foster children. We’ve applied ourselves to education reform. We started a charter school for at-risk kids. I’ve also been a state senator and member of the United States Congress for five years.”

Her popularity may have plateaued for a variety of reasons — Cain, Perry, factual inaccuracies, inadvertently causing a raging vaccine debate — but Michele Bachmann, for all the verbal missteps she makes, is still an accomplished woman, and one who at least deserves to not be portrayed as a joke for as long as she lasts in this race.