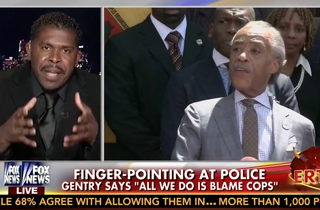 The protests, rioting, and insane police response in Ferguson has rapidly de-escalated overnight, but Fox & Friends invited on the show Jonathan Gentry, a minister whose “viral video” rant criticized the black community for not obeying the police.

“I’ve been pulled over, I know how to act when i’m pulled over,” he explained to Fox and Friends angrily. “That’s our problem. ‘You picking on me ’cause I’m black. What you doing that for?’ It just escalates. Humble yourself…Whatever that they got to do, whatever they pulled you over for, if you didn’t do nothing, what’s the problem?”

Gentry singled out Al Sharpton for escalating the tension while grandstanding, but also blamed Michael Brown, the teenager whose death sparked the protests, for starting it all: