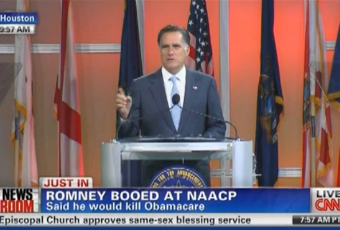 During his Wednesday morning speech before the NAACP Convention in Houston, Texas, Republican presidential candidate Mitt Romney explained that his plans include reducing government spending by eliminating “every nonessential expensive program I can find, and that includes ObamaCare.” Although several other Romney policy proposals were met with applause, the health-care remark was met with significant booing.

At the beginning of the speech, Romney noted that it was an “unexpected honor” to speak before the NAACP, and spent a great deal of time explaining how the current weak economy is worse for the black community than for most others. He also made the case that “as president, I will promote strong families and I will defend traditional marriage,” which was met with mild applause.

But as soon as Romney veered into his economic policy, which focuses on the reduction of government spending, the reception became tense. “We have to stop spending over a trillion dollars more than we take in every year,” he said to mild applause. “And so to do that i am going to eliminate every nonessential expensive program I can find — and that includes ObamaCare.” The room then erupted into prolonged booing.

Romney pushed through and continued to explain why he believes ObamaCare is a counterproductive job-killer, citing a Chamber of Commerce survey that found that three-quarters of its members believe the health-care law will make them less likely to hire people. Continuing with his “job creator” theme, he contrasted himself with President Barack Obama, telling the group that “If you want a president who will make things better in the African-American community, you are looking at him,” which was met with another round of boos.