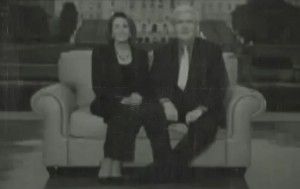 Former Massachusetts Governor Mitt Romney is taking the momentum of his endorsement by Christine O’Donnell and running with it, following it up with the release of a stale attack ad that highlights one of Newt Gingrich‘s momentary brushes with sane policy, in this case his support for legislation to fight global climate change. Never mind that Gingrich has since refudiated his Pelosi playdate, doesn’t Mitt realize that Ron Paul already made this ad, and made it about 11 times better?

Politics has become such a cynical business that it hardly seems worth pointing out the fundamental unfairness of the fact that Romney’s ad implies that Gingrich still supports legislative action on climate change. I do so only to highlight the fact that Newt’s reversal on this issue (and many others) is a worse offense than his couch trip with then-Speaker of the House Nancy Pelosi, but Yuen Woo-Ping-worthy flipper Mitt Romney is in no position to point that out.

While climate change denial may play well with the conservative base, an ad like this runs the risk of making Gingrich more appealing to general election voters, and in the process, making him seem more electable to the Republicans who now support Romney.

The ad itself is overly manipulative, crossing the line where sinister political commercial boilerplate is effective, and leaving it far behind. The crazy-eyed slo-mo of Al Gore at the beginning is a nice touch, but the disorienting cuts and focus effects are overdone, and the faux-American Beauty score is a drag. Ron Paul cut an ad that included this attack, and while it was over the top, it was brutally effective. Romney’s ad is unsubtle in a grinding, look-at-the-seams way that reeks of pandering, and it suffers from the pall of the candidate’s own history of “progressive” lapses.