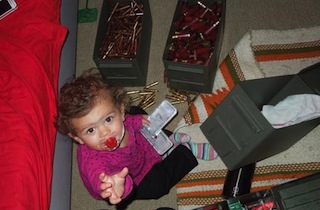 An arrest warrant has been issued for a mother in — wait for it — Florida after she failed to return her daughter per a shared custody agreement, instead leaving a note that she could not let the two-year-old be vaccinated and “brainwashed.”

Megan Everett picked up 2-year-old Lilly in early May, but did not return after the court-mandated week. The note she left for father Robert Baumann read:

“You are a great dad. If I let them take her and vaccinate her and brainwash her, I wouldn’t be doing what’s right. I cannot let a judge tell me how my daughter should be raised. We will miss you. But I had to leave.” [emphasis Everett’s]

Even Everett’s mother said that Lilly belonged with her father, saying that Megan had cut off ties to her family after becoming involved with Carlos Lesters, a “Confederate-flag-waving gun enthusiast.” Baumann suspected the anti-vaccination angle was meant to keep Everett out of school, where she might encounter topics Lesters found objectionable:

Authorities encountered Lesters when in the search for Lilly, and he informed them Everett intended to live life as a fugitive to keep her daughter “free.” Everett and Lilly remain at large.