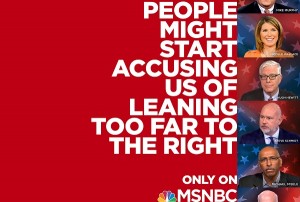 Although this has been a shift that has been a long time coming, MSNBC has now launched an ad campaign seeking to build on its Trump-fueled success with an appeal to conservatives that’s so ham-fisted, they actually had to clear it with Oscar Mayer‘s legal department first. Politico reports that as part of its rebranding, the network is now advertising its extensive slate of conservative commentators with an ad featuring the tagline “People might start accusing us of leaning too far to the right”:

In what is perhaps the network’s most overt symbol of the new tone, however, is another ad that will run in some conservative and mainstream outlets. The ad features some of MSNBC’s conservative and Republican contributors — like radio host Hugh Hewitt, GOP consultant Steve Schmidt and former RNC chairman Michael Steele — with a cheeky message: “People might start accusing us of leaning too far to the right.”

Griffin cast the rebranding as just one more stage in MSNBC’s “evolution.”

“MSNBC will turn 20 this year on July 15,” he said. “There have been so many evolutions, and look if you don’t evolve, in any medium, you’re going to lose. So I think we’ve been in a process of evolution and I feel very good about what we’re doing.”

The report goes on to say that MSNBC has seen large improvements in ratings in the first quarter of the year, not coincidentally timed to its increased reliance on live coverage of Donald Trump rallies, frequent visits by Trump, and a variety of Trump-related programming. The shift comes after the network’s liberal “Lean Forward” campaign gave way to a purge of progressive voices, and a move toward more middle-of-the-road programming.

We’ll see how this works out, but it’s an open question who this ad is supposed to appeal to. None of the contributors listed has anything close to credibility with conservative news consumers, while the overt pitch to the “other side” could potentially alienate left or center-left viewers.