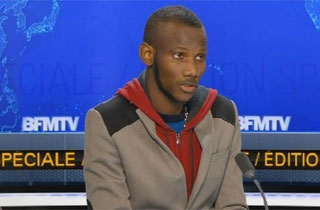 Lassana Bathily, the Muslim man who saved 15 lives during last week’s terror attacks in France, will be naturalized in a public ceremony next week after nearly 300,000 people signed a petition demanding he be given citizenship.

In addition, he will be given the Legion d’Honneur, France’s highest award of merit.

Bathily, an immigrant from Mali and an employee of Paris’s Hypercache market, managed to hide a dozen people — seven Jews among them — in the supermarket’s walk-in freezer when Amedy Coulibaly stormed the market last Friday, killing four people and holding dozens hostage in exchange for the freedom of his associates, Cherif and Said Kouachi, wanted for the Charlie Hebdo massacre.

What’s more, Bathily managed to escape the building using a fire escape and, after convincing the police he wasn’t an accomplice, gave them crucial logistical information about the building that eventually helped them storm the market, kill Coulibaly, and rescue the hostages.

His quick thinking was praised by French President Francois Hollande and Israeli Prime Minister Benjamin Netanyahu, who publicly thanked him by name during a speech in a Parisian synagogue.

According to RTL, Bathily had filed for naturalization in July of 2014, and the Ministry of the Interior fast-tracked his request. A massive petition circulating on Change.org certainly helped: within days of being posted, the petition garnered nearly 300,000 signatures.

Bathily, noted in the media for his humility, will be given the award in a naturalization ceremony on Tuesday, January 20th in Paris.