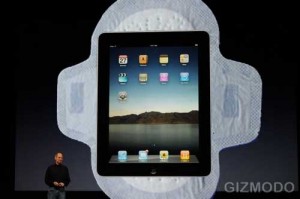 Today, we found out what the latest mysterious and life-changing product from Apple — the heralded multi-purpose new “Tablet” e-reader — would be called.

Is it just us, or does that remind you of stocking up on Kotex?

Trick question: It’s not just us. It’s the ENTIRE INTERNET.

“iTampon” has been trending on Twitter since the announcement, even at one point hitting #1. Since I started writing this post, it’s been mentioned over 9,000 times. Yes, yes the iPad might save the print industry, but did you hear how absorbent it is?

No, seriously. I don’t know a woman who hasn’t giggled over this, but also been gobsmacked that Apple could possibly have picked this name. As NPR’s Alicia Shepard — and countless other women — wondered on Twitter: “ipad? where were the women when this name was discussed?”

Obviously not in the room, because if they had been, it probably would have gone a little differently than Steve Jobs saying, “Hey! iPad! Sounds great!” and then calling a press conference.

Instead, Jobs launched a product that may be awesome, but immediately became an even more awesome punch line (“You can go everywhere with it, but NOT IN THE POOL!“). Still, it’s forced the geekosphere to not only consider, but embrace the monthly realities of all women, and that can only be a good thing. Seriously, dudes, get over it. I’m pretty sure your mom had her period, too.

But back to the iPad! Here’s a list of some handy, super-cool features:

Haaa. Research In Motrin! Get it? That may be the geekiest joke I’ve ever made.

Anyhow — no clue which marketing genius came up with this, but it’s certainly made me proud to be a woman. I will probably buy an iPad…when they make ’em in red. Now please enjoy this larger version of Steve Jobs presenting a giant Kotex. 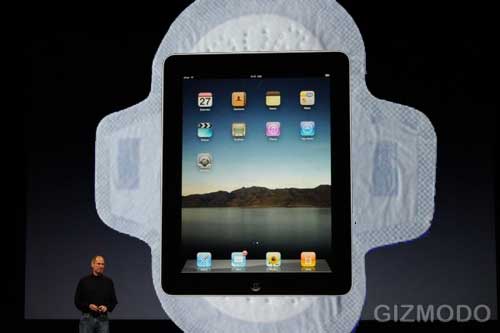 Related:
8 Reasons Women Should Be Excited for the iPad [Jezebel]
Some Thoughts on the Coming iPad Backlash [Daily Intel]
The iPad: Pros and Cons [Geekosystem]

Related in Typical Balkian Thoughtfulness:
Barack Obama Is Your New iPad [The Awl]

Related in Freshness, from MADtv: