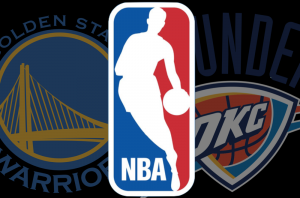 It all comes down to Monday night.

The Golden State Warriors hope to keep their dreams alive of repeating as NBA Champions tonight as they take on the Oklahoma City Thunder in a decisive Game 7. Facing elimination on Saturday night, it was the Warriors — led by Klay Thompson‘s 41 points with an additional 31 from Steph Curry — who won when it counted most to force tonight’s winner-take-all matchup for the Western Conference Championship.

Despite 57 combined points from Russell Westbrook and Kevin Durant, OKC fell just short in putting away the Warriors at home Saturday. Golden State poured in 33 points in the fourth quarter alone to win 108-101. The Thunder only hit 3-of-23 three pointers in the loss, compared to 21-of-44 for the Warriors.

“It will be the hardest game of our lives,” said Golden State’s Draymond Green of Game 7 after the win Saturday night. He continued, “It will be way harder than this game. Going back home, everybody will think, ‘Oh, it’s done.’ It will be way harder. But if we come out and do what we did and stick to the game plan, we’ll be fine.”

Game 7 will be played at the ORACLE Arena in Oakland, California, the place where the Warriors went an astounding 39-2 during the regular season. Tip-off begins at 9 p.m. ET on TNT, and the Warriors are favorites by 7 points in the matchup. Viewers can live stream the game at TNT Drama. NBA Tip-Off with host Ernie Johnson begins on TNT at 8:00 p.m. ET, following by the live broadcast of the game featuring Johnson, Marv Albert, Charles Barkley, Kenny Smith, Reggie Miller, Kevin Harlan, and Shaquille O’Neill.

The Cleveland Cavaliers have already punched their ticket as Eastern Conference champs, and are awaiting tonight’s winner before Game 1 of the Finals on Thursday. If they manage a win tonight in front of their home crowd, the Golden State Warriors will be only the 10th team in NBA history to come back from a 3-1 series deficit.