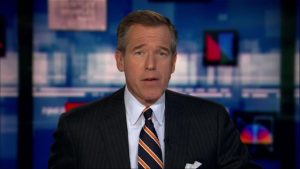 In February 2015, NBC News stalwart Brian Williams made headlines of his own when he was suspended for fibbing his way through accounts of his time covering the U.S. invasion of Iraq. At the time, NBC Universal CEO Steve Burke said, “[Williams’s] actions are inexcusable and this suspension is severe and appropriate… He deserves a second chance and we are rooting for him. Brian has shared his deep remorse with me and he is committed to winning back everyone’s trust.”

Now however, Williams’s past is simply, “ancient history” — at least, according to NBC News Chairman Andy Lack.

Although Lester Holt has taken over the Nightly News desk following William’s ouster, Williams is back on air in regular anchoring duties hosting his own show called “The 11th Hour with Brian Williams.” Lack told Erik Wemple of The Washington Post that the show is still in its “early, early day.”

“I always think of these things as works in progress,” Lack continued, who said that Williams’s turn was “[a]ncient history to me,” when pressed by Wemple.

Wemple points out that in the lead up to this month’s series debut of “11th Hour,” Williams eschewed the typical interviews and promotional clips to raise awareness about the show’s launch. Rather, he opted for the route of “shyness” Wemple writes.  Williams’s only sit-down on the topic was with with Matt Lauer. Williams at the time said simply, “I would like to take this opportunity to say that what has happened in the past has been identified and torn apart by me and has been fixed, has been dealt with.”