The massive earthquake in Nepal earlier today killed thousands of people, but it also triggered set off a deadly avalanche on Mount Everest. So far, reports have said 10 people died, though other unconfirmed reports say as many as 18 bodies have been found, which would make this the deadliest day on Everest in history. 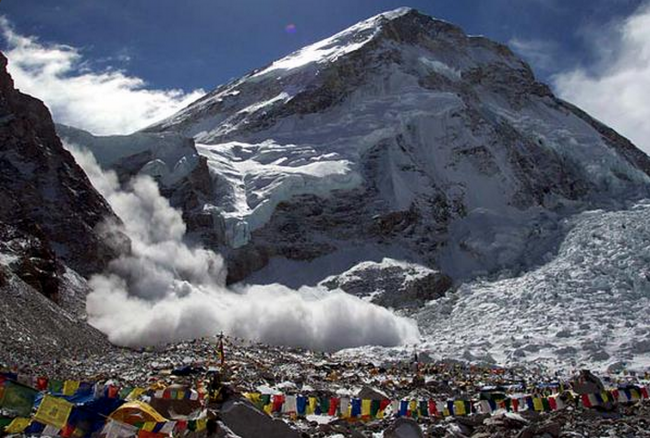 Meanwhile, there are many others who have been reported missing. Scores of people are stranded on the mountain, and some of the tweets about this are from people who had near-death experiences:

We have a @charitywater fundraiser on Everest right now stranded with 100 climbers above Ice Falls with no way out. Helicopter Evac needed

Walking into Ebc was coincidentally filming when the avalanche struck. Our team is safe, waiting for news of others pic.twitter.com/dzMTaOKU7x

Everest base camp huge earthquaqe then huge avalanche from pumori.Running for life from my tent. Unhurt. Many many people up the mountain.

A Massive earthquake just hit Everest. Basecamp has been severely damaged. Our team is caught in camp 1. Please pray for everyone.

Walking back from camp 1in EBC. A major earthquake occurred followed by a massive avalanche. Ran for my life, al fine now. No phone

One of the men on the mountain said that they dealt with the aftermath of the avalanche at the base camp first, and now they’re trying to “create new routes” to help and look for the others:

“Everybody’s pretty much in rescue mode, but this is different from some independent climbing accident where people can be rescued and taken somewhere else. I don’t know where somewhere else is.”

Some photos were taken at the scene of the base camp:

The first picture is an avalanche heading towards Mount Everest base camp.

The next 3 show the devastation & death:( pic.twitter.com/b1zFYJzHj6

Base camp sherpas running down the mountain, not even stopping in Lobouche! #Everest #NepalQuake pic.twitter.com/mwBwwH1lJb

And you can watch video of one of the mountaineers here, via NBC News:

Google Executive Daniel Fredinburg was one of the 10 people killed during the avalanche. Google’s Director of Privacy Lawrence You released the following statement:

“Sadly, we lost one of our own in this tragedy. +Dan Fredinburg a long-time member of the Privacy organization in Mountain View, was in Nepal with three other Googlers, hiking Mount Everest. He has passed away. The other three Googlers with him are safe and we are working to get them home quickly… Our thoughts are with the people of Nepal, and with Dan’s family and friends during this terrible time.”

This is Dans little sister Megan. I regret to inform all who loved him that during the avalanche on Everest early this morning our Dan suffered from a major head injury and didn't make it. We appreciate all of the love that has been sent our way thus far and know his soul and his spirit will live on in so many of us. All our love and thanks to those who shared this life with our favorite hilarious strong willed man. He was and is everything to us. Thank you.

Day 20: Saving ice on top of Kala Patthar. Everest Basecamp in the background is a climate change hotspot. #Savetheice

You can read more via ABC News, here