New Accuser Claims Franken Groped Her During a Photo-Op: ‘He Totally Grabbed My Butt’
video

New Accuser Claims Franken Groped Her During a Photo-Op: ‘He Totally Grabbed My Butt’ 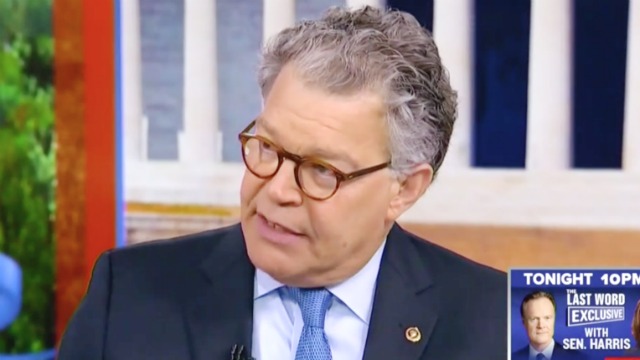 Just days after radio host LeeAnn Tweeden came forward with her claims that Sen. Al Franken (D-MN) forced himself on her for a kiss and groped her, a new accuser has emerged — and she too says the Minnesota Senator groped her.

According to CNN, Lindsay Menz reached out to the network after Tweeden went public last Thursday. Menz claims that — in 2010 at the Minnesota State Fair — Franken got too close while posing for a photo with her.

She told CNN that Franken, “pulled me in really close, like awkward close, and as my husband took the picture, he put his hand full-fledged on my rear. It was wrapped tightly around my butt cheek.”

Menz said she promptly told her husband, “He totally grabbed my butt.”

Franken, in a statement, told CNN that he didn’t recall the incident.

“I take thousands of photos at the state fair surrounded by hundreds of people, and I certainly don’t remember taking this picture,” Franken said. “I feel badly that Ms. Menz came away from our interaction feeling disrespected.”

Menz produced the resulting photo, which CNN posted atop its report. In the shot, Menz’s face is touching the Senator’s. But the pictures only show the two from the chest up.

“I felt gross. It’d be like being walking through the mall and some random person grabbing your butt,” Menz said. “You just feel gross. Like ew, I want to wash that off of me.”