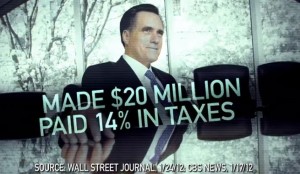 The Obama campaign has released a new ad, pegged to the report released Wednesday by the non-partisan Tax Policy Center, that hits Republican presidential candidate Mitt Romney where it hurts: right in the old tax returns. The ad, entitled “Stretch,” contrasts average Americans trying to stretch a buck (get it?) with the ultra-rich Romney, whose tax plan would hit middle class families, while enriching himself, according to the report.

“You work hard.  Stretch every penny,” the ad begins, over distressing home-ec stock footage. “But chances are you pay a higher tax rate than him.”

Over a classic negative ad color-drained still, the narrator continues, “Mitt Romney made twenty million dollars in two thousand ten but paid only fourteen percent in taxes…probably less than you.”

“Now he has a plan that would give millionaires another tax break,” the ad goes on, now over a guest appearance by Donald Trump’s jumbo jet, segueing to more grainy household footage, “And raises taxes on middle class families by up to two thousand dollars a year.”

The Romney campaign’s response to the Tax Policy Center has, thus far, been a weak mixture of attacking the messenger, and faulting the study for using realistic growth projections, so it will be interesting to see how they respond to this ad, which throws in Romney’s taxing tax return issue, to boot.

The ad, according to the campaign, will air in New Hampshire, Virginia, North Carolina, Florida, Ohio, Iowa, Colorado, and Nevada, a continuation of the Obama campaign’s focused efforts in swing states that have seen the President’s poll numbers surge above 50% in three key states recently. It’s an encouraging sign that the huge fundraising gap can be flattened somewhat by the smart use of available resources. There’s only so much available airtime in these states, after all.

There may, soon, come a time when this ad seems generous to Mitt Romney. That 13.9% tax rate the Obama campaign quotes is the only Romney rate we know for sure, but as pressure mounts on the candidate to release more tax returns, it becomes more likely that we’ll have a different set of facts to evaluate before Election Day.