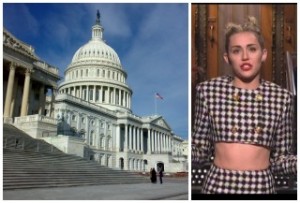 “How unpopular is Congress?” has quickly become one of the easiest comic set-ups in Washington. And because so many people just really hate Congress, the jokers now have a lot more ammunition to work with, because Congress is now officially less popular than hemorrhoids and hipsters, but at least the institution remains more popular than Miley Cyrus, twerking, and Anthony Weiner. Small victory!

Public Policy Polling conducted a poll [PDF] to get the hard data on exactly how much Congress is hated by the people it’s supposed to represent. Only eight percent of those polled have a favorable opinion of Congress, with older people much more angry at the legislative body than younger people.

Here is a list of things that people favored more than Congress, including the percentages they received when compared to the denizens of the Capitol.

*As you can probably figure out, this did not hold across party lines, as Republicans still trust Congress far more than they do the IRS.

Thankfully, there are still some things that people consider lower on the rung than Congress. Toenail fungus is only slightly more preferable to Congress, but here are some of the things people unequivocally agreed are far worse than our elected legislators.

So GOOD NEWS, Congress. You’re more popular than heroin and twerking. Give yourselves a big hand!