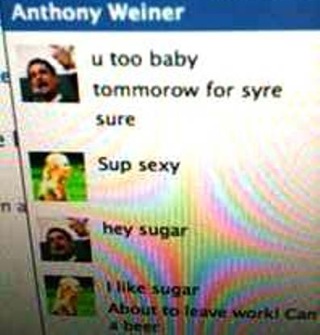 A fifth woman has emerged late tonight in relation to the Rep. Anthony Weiner online sex scandal, this time through no fault of her own. Traci Nobles of Athens, Georgia mistakenly left her Facebook account open near her roommate, who without her knowledge sent exchanges between the Congressman and Rep. Weiner to the Las Vegas Sun.

The messages between Nobles and Weiner, according to the Sun, were tame compared to some of the others released in the past two days, though they used language like “sexy” and “sugar.” Nobles had no intention of releasing them, however, despite leaving some racy messages to him publicly, things like asking him to do his legislative work naked. She immediately sent a message to the Sun after discovering what her roommate had done:

“I really regret that this was sent to you,” Nobles told the Las Vegas Sun, after confirming that an unnamed roommate went into her Facebook account, which had been inadvertently left open, and emailed the Sun a screen shot of a private conversation between Weiner and Nobles that appears to date from August. “She thought someone should know,” Nobles said.

Given the extent of the congressman’s flirtatious speech and physical details that have been made public, there’s little from the brief excerpt of the Nobles-Weiner conversation that could shock us. The bit of the conversation that was made available to the Sun shows the two exchanging terms of endearment such as “sexy” and “sugar” and arranging some sort of meeting for the next day — although it’s not clear from what’s presented whether it’s a meeting that was to take place online or in person.

Nobles has never met Rep. Weiner from the facts given the paper, as she is from Georgia and works in a health fitness program or elementary and middle schools. The messages given the paper do not make it clear whether they planned on meeting in person or just online, although they did schedule a time and place to talk.

Below is a higher-resolution version of her Facebook profile picture: 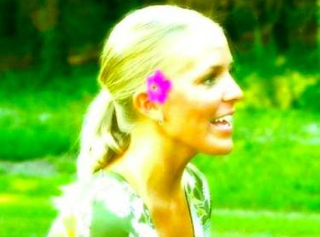