New Sarah Palin Ad Welcomes Grizzlies Of All Genders (As Long As They’re Not “Politicos!”) 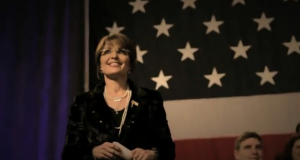 For all of the men out there who loved Sarah Palin’s last totally-not-a-campaign-ad campaign ad but felt left out of the “Mama Grizzlies” theme, it’s your lucky day! Palin just tweeted a link to her latest video which is inclusive to Grizzlies of every gender, size, or creed. Just as long as they’ve never been anywhere near one of those darn Beltways!

The video continues the theme and structure of the last one which gained so much popularity a few months ago. Again we have inspirational music playing (a bit more drums this time to show that things just got real). Again we have Palin’s disembodied voice imparting a rousing speech to the masses. And again we see those masses interacting with Palin, seeing her shake hands with the regular people that anyone who has ever stepped foot in a political office ever just doesn’t understand.

The voiceover (which is an edited selection of pieces from her speech at the National Tea Party Convention in Nashville last February) plays as follows:

“The Tea Party movement is not a top-down operation. It’s a ground-up call to action that’s forcing both parties to change the way they do business and that’s beautiful. The soul of this movement is the people, everyday Americans, who grow our food and run our small businesses, who teach our kids and fight our wars. They’re folks in small towns and cities across this great nation who saw what was happening and got involved. It is so inspiring to see real people, not politicos, not inside the beltway professionals come out and stand up and speak out for commonsense, conservative principles. Who can argue a movement that is about the people? Government is supposed to be working for the people. That is what this movement is about. This party that we call the Tea Party is the future of politics and I am proud to get to be here today.

It’s a slick piece of filmmaking that mixes tons of flags waving in the wind, hard-fought people marching, and their seeming queen smiling into a potent combination sure to show up on every cable news show in existence over the next few days.