New York Gov. Andrew Cuomo On Gun Control: ‘Confiscation Could Be An Option’ 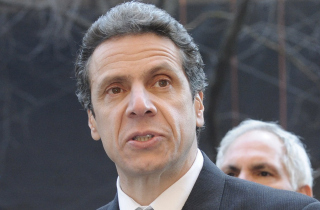 In what will likely infuriate plenty of legal gun owners, New York’s Gov. Andrew Cuomo said this afternoon that he’d like the state’s legislature to consider all options in debating new gun control measures, including “confiscation” of “assault” weapons or “mandatory sales to the state” and “permitting.”

The state legislature will likely debate new gun-related laws after the governor introduces the thought in his upcoming State of the State address on January 9th, 2013.

TheBlaze reports that Cuomo told Albany’s WGDJ-AM that while gun control hasn’t been on the docket recently, he plans to reach out to state legislators and eventually submit a proposal for new laws. One of his stated goals is to change state laws regarding the possession of so-called “assault” weapons and high-capacity ammunition magazines.

According to Cuomo, his state’s existing laws regarding those matters have “more holes than Swiss cheese.”