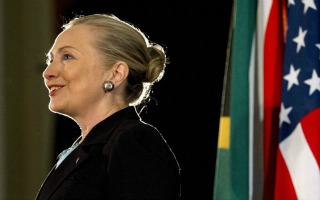 Continuing their less-than-estimable tradition of publishing cover stories based on premises that range from the debatable to downright laughable, the onetime print magazine Newsweek trolled the nation again on Friday when they declared Secretary of State Hillary Clinton is “the most powerful woman in American history.”

The argument Newsweek makes when declaring Clinton the “most powerful woman” in America’s 225 plus years of existence rests primarily on her sky-high popularity and her decades of service in government. 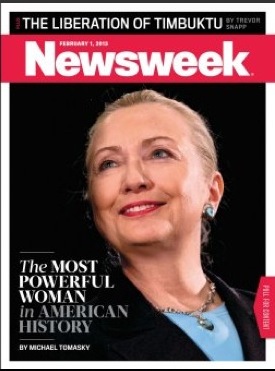 Though Clinton is popular, the author, Michael Tomasky, notes that “Not everyone is in on this love-fest.”

[E]ven the seething hatred has, over the years, embroidered her legend—debates about Clinton have somehow always ended up really being about us as a nation, who we are and who we want to be, in such a way that even those who dislike her are implicitly acknowledging that, yes, she is the touchstone.

Tomasky cedes the point that other “modern women” in American history have occupied positions of influence. He lists Eleanor Roosevelt, Elizabeth Candy Stanton, Susan B. Anthony, Lucretia Mott, Gloria Steinem, and Phyllis Schlafly as examples of powerful women who altered the course of American history in some form.

In fact, Tomasky quotes a New York University historian who effectively torpedoes the very premise of his article. “I just don’t see her laying out a new ideological or intellectual direction for the country, or putting forward a transformative vision,” the historian observed.

Regardless, Tomasky says that Clinton’s 20 years of public service have altered the paradigm and allowed Americans to envision – even accept – the inevitability of a woman occupying the Oval Office.

There is another woman who altered the course of American history who never held elected office, but fails to make Tomasky’s list of powerful women who rival Clinton’s outsize impact on Newsweek contributors. Her influence was dramatic and measurable and by no means classically liberal: the hatchet-wielding teetotaler, Carrie Nation.

With the occasional property-destroying episode as the exception, Nation popularized the temperance movement through force of will. She led an army of wives and mothers into unashamed political activism under the guise of socially acceptable religiosity. Nation’s activism greatly augmented the influence of the Women’s Christian Temperance Union – the most powerful political organization by and for women of the time. This group’s mission soon evolved from the prohibition of alcohol to the ultimately successful pursuit of the vote for women. Nation guilt-tripped America into passing a variety of local laws which eventually resulted in the partial or complete prohibition of alcohol most of America’s non-urban centers – well before the passage of the 18th Amendment.

Unlike Clinton, Nation did outline a new “ideological and intellectual direction” for the country, at a time when the political barriers in place before women interested in shaping public policy were far more impregnable than they are now. While her legacy is by no means celebrated, Nation’s influence is undeniable. Even Elizabeth Cady Stanton’s antebellum activism, while influential and groundbreaking, yielded nothing close to the series of legislative earthquakes that resulted from Nation’s agitation.

I suppose it would be too much for Tomasky to temper his enthusiasm for what Clinton represents for his preferred ideology to apply a bit of historical perspective to his profile of the soon-to-be former Secretary of State. Historical perspective, I suppose, does not generate much in the way of click-throughs, does it?