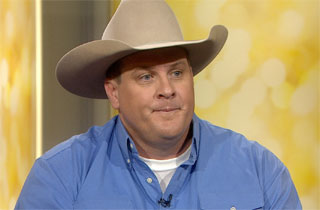 The Deming Headlight reported that Morales, who’s running in the state’s Democratic primaries, spoke at an event held at the Tierra Blanca High Country Youth Ranch as a guest of its controversial owner, Scott Chandler. Last year, the rancher was accused of multiple charges of child abuse, including shackling and beating children deemed to be “troublesome,” and at one point disappeared in the middle of the investigations, along with nine other troubled teenagers staying at the ranch. (They were later recovered and Chandler claimed that he had taken the teens on a wilderness exploration.)

Chandler is still being investigated by state authorities and faces at least three lawsuits — including one from a family whose son died at the ranch — but is apparently close to Morales, saying in another interview with the Headlight that the state senator “was instrumental in working the legislative session this year to help out the ranch.”

The New York Times ran a story on the lawsuits last year, and describe the alleged behavior thusly:

Pegasus Legal Services for Children, a New Mexico law group, had been urging the state to look into the ranch. In a letter to state officials, the group noted that youths who spent time at the ranch reported to the police that children there “are routinely hit, shackled and handcuffed, deprived of food, deprived of full days of public instruction every school day, and forced to exercise as punishment.”

…Nathan Bailey, who spent a year of high school at Tierra Blanca in 2012, said he was handcuffed and shackled for days upon arriving there because he was considered a runaway risk.

He said staff members allowed students at the ranch to beat other teenagers considered troublemakers, and he witnessed several episodes where staff members assaulted other students. “There was always a feeling of despair there,” said Mr. Bailey, now a freshman at the University of Arkansas. “The second I got into my parents’ car and drove away, I spilled my guts.”

When asked to comment by the Albuquerque Journal, Morales apparently didn’t distance himself from Chandler, saying in a statement that “the Chandler family are among a large and diverse community from the area who have been gracious enough to support my campaign.”

[h/t The Daily Caller]
[Image of Scott Chandler via TODAY.com]