No, Rachel Maddow Is Not ‘Prepping for a Possible Trump Presidency’ by ‘Studying Hitler’ 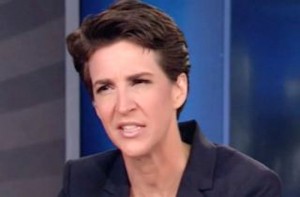 MSNBC’s Rachel Maddow revealed in a new interview with Rolling Stone that she’s been meticulously prepping for a possible Donald Trump presidency.

By studying the first few months of Adolf Hitler’s tenure as German chancellor, beginning in 1934.

Are you disappointed in your country for making Trump one of the two major-party nominees for president?
I am fascinated in my country! [Laughs] There’s no mystery about Trump. I mean, there’s a little mystery as to why he wanted to do this. Have you seen those frustration moments for him on the trail: “I had a good life. Why am I doing this?”  What is amazing is the Republican Party that picked him. They had 330 million people to choose from, and they’ve decided that he is the best one to be the standard-bearer of one of the two major parties of the greatest nation on Earth. Like, talk to me, Republican voters! What’s the worst-case scenario for America if he wins? It can be pretty bad. You don’t have to go back far in history to get to almost apocalyptic scenarios.

Is part of you worried we’re living through the first few chapters of some dystopian science fiction novel?
Over the past year I’ve been reading a lot about what it was like when Hitler first became chancellor. I am gravitating toward moments in history for subliminal reference in terms of cultures that have unexpectedly veered into dark places, because I think that’s possibly where we are.

That’s it. No mention whatsoever of “meticulous prepping” or even “prepping.” No equivalence between Trump and Hitler.

Concha helpfully reminds us that Hitler was a mass-murdering psychopath — perhaps to provide context for readers who may be unfamiliar with Hitler.

If to provide context, it might have been useful to remind readers also of Trump’s various remarks that inform Maddow’s belief that the country may be “veer[ing] into dark places,” a contention hardly exclusive to her. This might include his cavalier attitude toward using nuclear weapons; pattern of hostility toward a free, critical press; coy cultivation of support from White Supremacists; or announced intention to ban practitioners of a major world religion from entering the country.

I understand that for some the temptation to compare Trump to Hitler is almost as strong as the impulse to accuse political opponents of doing the same, but we should still aspire to some degree of restraint and honesty.