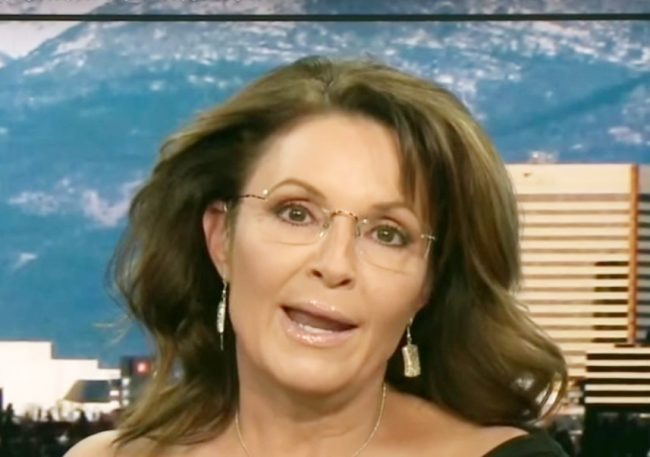 Sarah Palin sparked outrage by criticizing an NFL player for donating $50k to Meals on Wheels, a program benefitting seniors and the disabled, which is facing possible funding cuts under Donald Trump‘s new budget.

The title of her blog post on the topic is, “SERIOUSLY? Colin Kaepernick Just Pulled ANOTHER Political Stunt…” Obviously, her use of “another” refers to Kaepenick’s decision not to stand for the national anthem in protest of police brutality. In a tweet linking to the post, she mused, “No wonder he can’t get a job…” in reference to reports that some NFL teams don’t want to hire him. The post itself outlines her oppositional argument, which is that it has yet to be confirmed that Meals on Wheels will lose funding.

imagine being so racist you get mad a black athlete for donating to meals on wheels https://t.co/wIEa4RBK3s

To recap: Sarah Palin is mad at Colin Kaepernick because he donated to Meals on Wheels. These people all have brain parasites https://t.co/jKx4QQPCV1

@sarahpalinusa let me get this straight. You’re angry b/c Kaepernick donated HIS money to charity that provides meals to housebound elderly?

Republicans: Charities will do what gov’t doesn’t!
Kaepernick: (donates to charity)
S. Palin: what a disgusting political stunt

Sarah Palin takes a brave stand *against* Colin Kaepernick donating $50,000 to meals on wheels. You read that right. https://t.co/ZtkCS0henM

@SarahPalinUSA what’s wrong with donating to charity? So you’re saying he’d have a job if he was selfish & didn’t help those in need?

@SarahPalinUSA Honestly, what is your current job?

@SarahPalinUSA if you tweet about Colin Kaepernick at 12:35 AM you must not have a job either.

She concluded her post with, “Kaepernick is pretty bold to make another political move like this one.”

There are a variety of ways to be pretty bold, it seems.