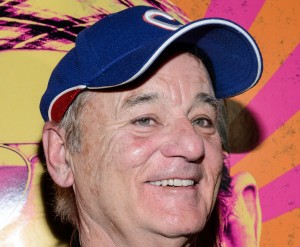 Why did star of film and television Bill Murray throw several fans’ cellphones off the roof of a restaurant roof during a Justin Timberlake publicity event? Maybe he wanted to see time fly. See, most people use phones to tell time these days, instead of watches. Actually, it seems the legendary and famously accessible actor just got fed up with the flurry of flash photography his admirers were bombarding him with. From Gossip Cop:

On Thursday night, Murray was at the restaurant Vesuvio, where Justin Timberlake was throwing a party for his 901 tequila, when a number of fans bombarded the comedic actor and started repeatedly taking flash photos of him. Murray, who’s usually very accommodating, became annoyed with the too-close-for-comfort fans, and grabbed three phones and tossed them over the restaurant’s second floor rooftop.

It’s unclear whether it was more than one distressed fan or not, but Gossip Cop is told the police received a complaint at 10:30 p.m about Murray throwing the phones of fans over the side of the restaurant, and stopped by the eatery, which often attracts stars. By the time the cops arrived at Vesuvio, Murray had already left.

Murray is beloved enough to weather a stunt like this, which probably had loads of slapstick appeal in person, bug in fairness to the fans, the entire point of an event like that is publicity, and the expectation that you will be photographed.

One key detail from Gossip Cop‘s report raises important questions. According to them, Murray’s rep “acknowledged he tossed three phones,” but “Only two of the phone were damaged.” We need to know what kind of phone that was, because most of our phones’ screens crack if you swipe too hard.